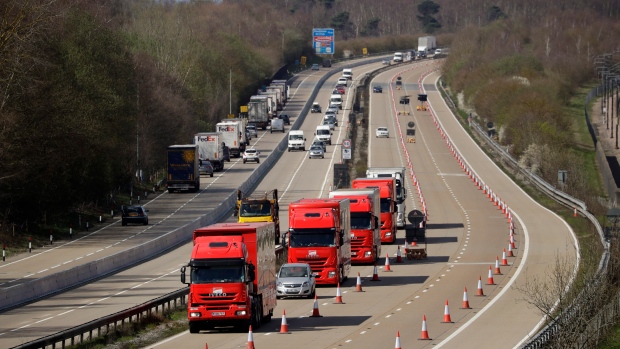 On the first day of Operation 'Brock', (Brexit Operations Across Kent) traffic passes through a contraflow system being tested on one side of the M20 motorway near Harrietsham, Kent, in south east England, Monday, March 25, 2019. , The Associated Press

The U.K. government is warning of 7,000 truck-long queues in Kent in a “reasonable worst case” scenario due to Brexit, a stark assessment of the potential chaos when Britain leaves the European Union’s single market and customs union at the end of the year.

In a letter to Britain’s border industry, Cabinet Office Minister Michael Gove said the flow of freight between Dover and Calais -- a vital U.K. trade artery -- could be reduced by as much as 80 per cent compared to normal levels. The government’s worst-case assessment is that as many as 70 per cent of trucks traveling to the EU may not be ready for new border controls, according to the letter.

“The biggest potential cause of disruption are traders not being ready for controls implemented by EU Member States on 1 January 2021,” Gove wrote in the letter dated Tuesday, seen by Bloomberg News. “It is essential that traders act now and get ready for new formalities.”

Preparing for customs checks on trade with the EU is one of the biggest logistical challenges facing Boris Johnson’s government. Failure risks major disruption to commerce with the U.K.’s largest trading partner when the Brexit transition period ends on Dec. 31.

The government’s fear is that trucks will be stopped by EU officials for failing to have the correct post-Brexit paperwork, causing supply chain chaos and adding to the economic pain of coronavirus.

Play our Brexit game: The Difficulties of Trade in Post-Brexit U.K.

Gove’s letter is the first time that a government minister has put their name to the predictions of significant upheaval at the U.K.-EU border in Jan. 2021. Last week, the Guardian newspaper reported on a briefing document from civil servants which forms the basis of Gove’s intervention, warning of long queues and disrupted freight flow.

The Cabinet Office did not immediately respond to a request for comment.

Key to the government’s plan to minimize disruption is a new IT system -- the Smart Freight Service -- which would issue trucks with a permit indicating that they have the right paperwork to enter the EU. Trucks entering Kent without a permit would be fined 300 pounds (US$382). However, the government acknowledges the system will still be in testing mode in January, and users risk enountering bugs.

The government is also building facilities to hold trucks with incorrect paperwork, in a bid to minimize traffic on the roads. It recently closed a coronavirus testing center at Ebbsfleet Station in Kent to make way for such a site.

In the letter, Gove said a winter spike in coronavirus may suppress freight demand which could limit the extent of disruption. However, absenteeism among port or border staff and social distancing measures could have an adverse effect.

The minister also said that any restrictions on traffic moving into the EU from the U.K. would impact freight flowing in the other direction too. The U.K. has tried to ease pressure on imports by deciding not to impose customs controls on goods coming from the EU until July 2021.

“We assume both imports and exports could be disrupted to a similar extent,” Gove’s letter said. “Heavy Goods Vehicles (HGVs) that are caught up in congestion in the U.K. will be unable to travel to the EU to export products and/or collect another consignment.”