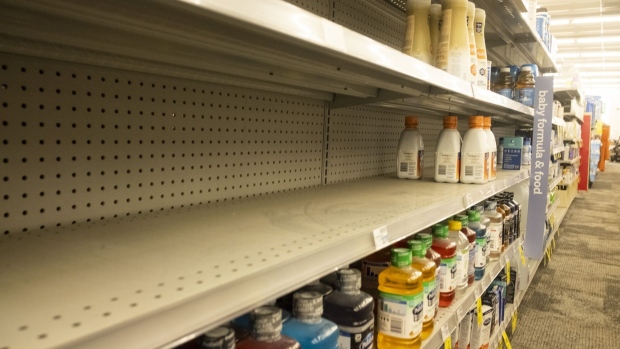 Nearly empty shelves in the baby formula aisle of a grocery store in Detroit, Michigan, US, on Thursday, May 19, 2022. A leading House Democrat plans to grill the Food and Drug Administration’s chief about plans to reopen an Abbott Laboratories infant formula plant without first addressing a whistle-blower’s allegations. , Bloomberg

(Bloomberg) -- A first air shipment of baby formula will be delivered to the US on Sunday under an emergency program authorized by President Joe Biden to address a national shortage that has parents struggling to meet the needs of their newborns.

Agriculture Secretary Tom Vilsack will travel to Indianapolis to greet the arrival of 132 pallets of Nestlé Health Science Alfamino Infant and Alfamino Junior formula, the U.S. Department of Agriculture said in a statement Saturday.

While manufacturers say the pandemic disrupted their supply chains, an Abbott Laboratories recall of formula in February and the closing of an Abbott plant turned the shortfall into a crisis, prompting Biden on Wednesday to invoke the Defense Production Act to boost supplies.

“These formulas have been prioritized because they serve a critical medical purpose and are in short supply in the United States,” the Agriculture Department said. “Additional flights will be announced in the coming days.”

The formula shipment on US military aircraft is originating from Zurich, Switzerland, after Biden announced the Operation Fly Formula program to bring imports in from overseas.

The first load means as many as 1.5 million bottles of “safe Nestlé infant formula” will be coming to U.S. shelves as soon as possible, Biden said on Twitter on Friday.