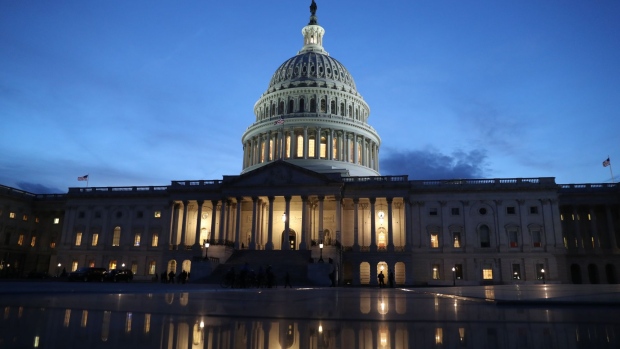 The U.S. budget deficit widened by 23 per cent to US$747.1 billion in the first nine months of the fiscal year, as rising spending eclipsed a small bump in revenue from the Trump administration’s tariffs.

Federal expenditures increased to US$3.36 trillion in the period from October to June, up 6.6 per cent from a year earlier, the Treasury Department said on Thursday. Revenue rose by 2.7 per cent to US$2.61 trillion.

Collections from customs almost doubled to US$50.5 billion from a year earlier. President Donald Trump’s administration last year imposed tariffs on everything from Chinese goods to steel and aluminum imports. Still, custom duties comprise only a small share of total receipts.

America’s budget deficit is widening as a result of Trump’s tax cuts, which are expected to add about US$1.5 trillion to the national debt over a decade, and higher spending approved by Congress. The gap will exceed 4 per cent of gross domestic product this year, and stay above that level through at least 2029, the Congressional Budget Office forecasts.

The shortfalls have some fiscally conservative groups and politicians worrying about future repayment, particularly as economic growth is expected to cool. The U.S. has a legal cap on its national debt, and may hit it as early as September -- creating a default risk, unless lawmakers can agree to raise the debt ceiling.

But there’s little sign of concern about deficits or debt ceilings on the bond markets. The U.S. government can borrow 10-year money at historically low interest rates of little more than 2 per cent.

U.S. outlays have been growing as a wave of baby boomers retire, weighing on mandatory spending for programs like Medicare and Social Security. Department of Defense spending on military programs has also been rising, increasing by 8.5 per cent in the nine-month period.

For the month of June, the budget deficit was US$8.48 billion, compared with US$74.9 billion a year earlier. The CBO has said that shifts in the timing of payments decreased outlays in June this year and increased them in June 2018.