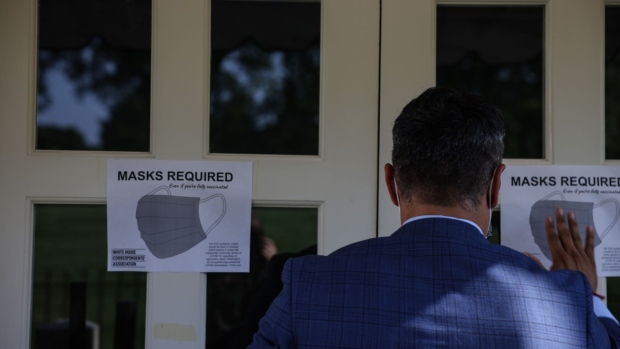 Apartment buildings in New York, U.S., on on Monday, July 5, 2021. New York's residential market is heating back up amid the easing of commercial restrictions and lower Covid-19 rates, although the market has yet to return to pre-pandemic levels, Forbes reports. Photographer: Jeenah Moon/Bloomberg , Bloomberg

The U.S. House of Representatives failed to pass legislation that would have extended a national moratorium on renter evictions, leaving millions of Americans at risk of losing their homes after the ban lifts on Saturday.

Florida reported 110,477 weekly cases, an increase of more than 50% from the previous week. The state continues to account for more than a fifth of all U.S. infections.

The U.S. Centers for Disease Control and Preventions stopped tracking the effectiveness of vaccines -- how many fully vaccinated people contract “breakthrough infections” -- in May, just as the troublesome delta variant was emerging. Bloomberg gathered data from 35 states and identified more than 100,000 breakthrough cases.

Walmart Inc. and Walt Disney Co., two of the largest private employers in the U.S., are requiring some staff to be vaccinated. Broadway theaters in New York City will also mandate vaccinations and masks for audience and performers.

House Speaker Nancy Pelosi’s bid for a last-minute extension of an eviction moratorium for renters collapsed Friday, leaving millions of Americans at risk of losing their homes after the ban lifts on Saturday.

The rare political defeat for Pelosi, who has exercised tight control over House Democrats but was unable to unify them behind the effort.

The House adjourned Friday without taking up legislation to extend the moratorium until Oct. 18. That came after a day of arm-twisting by the speaker and her leadership team as they tried to find the votes.

Florida reported 110,477 weekly cases, an increase of more than 50% from the previous week and vaulting the state’s infections to the level of the surge around the New Year, state data show. The state continues to account for more than a fifth of all U.S. infections.

Florida currently has the highest daily hospital admissions of the entire pandemic, according to data from the Centers for Disease Control and Prevention. New admissions rose more than 54% in the week ending July 28 than the previous week, the data show.

Walt Disney Co. said it will require all salaried and non-union hourly employees in the U.S. working at any of its sites to be fully vaccinated. It has also begun talks with unions about a vaccine mandate for employees under collective bargaining agreements.

Walmart Inc. is requiring its headquarters and regional staff to be vaccinated by Oct. 4, unless they have an approved exception. The requirement does not apply to associates that work in stores and clubs. Walmart separately told its frontline store and warehouse associates Friday to don masks again.

Illinois reported almost 11,700 new cases this week, a 46% increase over the previous week, according to the state’s Department of Public Health. Hospitalizations rose 35% week over week and intensive care admissions increases by 24%, with 41% increase of people in ventilators. Another 39 deaths were reported.

The state is inoculating people at above the national average, with 62% of people having received at least one dose. That number for the U.S. is 57.2%, according the Bloomberg Vaccine Tracker.

Roblox Corp., whose video games are popular with kids and youths, is pushing out returning to the office to Jan. 4 from mid-September.

Employees can still voluntarily work at or visit the company’s headquarters starting Sept. 13 if they are fully vaccinated, the company said. Roblox is joining the ranks of other companies delaying return to the office amid a steep rise of cases nationwide.

The U.S. agency leading the fight against Covid-19 gave up a crucial surveillance tool tracking the effectiveness of vaccines just as a troublesome new variant of the virus was emerging. While the CDC stopped comprehensively tracking what are known as vaccine breakthrough cases in May, the consequences of that choice are only now beginning to show.

While the CDC has stopped tracking such cases, many states have not. Bloomberg gathered data from 35 states and identified 111,748 vaccine breakthrough cases through the end of July, more than 10 times the CDC’s end-of-April tally.

Breakthrough cases are expected, and the number and proportion of them should rise as more people are vaccinated. The CDC said at the time that it would continue to collect data on breakthrough cases only if the infections resulted in hospitalization or death — rare because vaccines provide significant protection.

That decision is now being questioned, including by state officials dealing with the virus on the front lines.

House Speaker Nancy Pelosi sought to scrape together enough votes to extend a national moratorium on renter evictions before it expires Saturday, a move requested by President Joe Biden that Democrats say is desperately needed to keep families and children from the streets.

In an attempt to convince moderates, Pelosi floated a compromise of extending the moratorium until mid-October rather than December as was originally proposed.

The Food and Drug Administration plans to speed up its review of Pfizer Inc. and BioNTech SE’s Covid-19 vaccine for full approval in an effort to persaude more to get immunized.

An FDA spokesperson said the agency is taking “an all-hands-on-deck approach.” President Joe Biden has said he expects full approval for Covid shots in early fall.

Governor Ron DeSantis of Florida said he would sign an executive order to reverse a decision by Broward County, the state’s second-largest, to require masks indoors in schools for students, staff and visitors.

De Santis told a crowd on Friday that he had the authority to order the state’s departments of health and education to issue emergency orders allowing parents “to make this decision about wearing masks for their children.”

Florida is recording the largest number of new cases nationally, about one in five in the U.S. Broward officials said they were following the new mask guidance this week by the Centers for Disease Control and Prevention.

In July, 469 cases of Covid, primarily caused by delta, were recorded during the Barnstable outbreak and 74% of the cases occurred in fully vaccinated individuals, the Centers for Disease Control and Prevention said Friday in a study.

Yale University is reinstituting a requirement that all individuals wear masks in indoor campus spaces to combat high levels of the delta variant, starting Aug. 2. Exceptions will be made for those working alone in a segregated space, such as a private office or in a partitioned cubicle.

New Haven County had fallen under the category with “substantial” level of delta transmission, according to the Centers for Disease Control and Prevention.

Broadway theaters in New York City will require vaccinations for audience members, performers and other staff, who will also need to wear masks indoors.

The Broadway League said on Friday that owners and operators of all 41 Broadway theaters decided to require guests to show proof of vaccination when they enter the venues.

The move comes as the delta variant rips through the city and cases increase again -- just as Broadway shows reopen after 16 months of dark theaters. Vaccines were already required to attend Bruce Springsteen’s Broadway tour, which began in June. There are no city or statewide vaccine mandates, although public workers will soon be required to get the vaccine or submit to weekly testing.

Visa Inc. is considering requiring employees to get vaccines ahead of asking them to return to offices in the fall.

The firm has reopened most of its offices around the world, but the vast majority of staff have continued to work from home, Chief Executive Officer Al Kelly said. Ahead of a broader return, the San Francisco-based payments network has asked workers to let the company know their vaccination status, he said.

“From the beginning of this pandemic, the safety of our employees has been our top objective,” Kelly said Friday in a Bloomberg Television interview.

The Kremlin’s ambitions to win soft-power dividends around the world from Russia’s Covid-19 vaccine are being hampered by delays in delivering Sputnik V to foreign buyers clamoring for supplies.

Separately, a small trial that combined the first dose of Sputnik V with AstraZeneca’s vaccine found no serious side effects among recipients, the Russian Direct Investment Fund said Friday.

The study started in February and has vaccinated 50 volunteers in Azerbaijan to date, according to the sovereign wealth fund, which is responsible for marketing the Russian vaccine internationally.

England’s Covid-19 infection rate unexpectedly rose last week, undermining hopes that the country was getting past the spike in daily cases earlier in the summer.The percentage of people testing positive rose to 1.57 -- the highest since January -- from 1.36, the country’s statistics office said Friday. It had been expected to decline after daily case rates dropped in the second half of July.