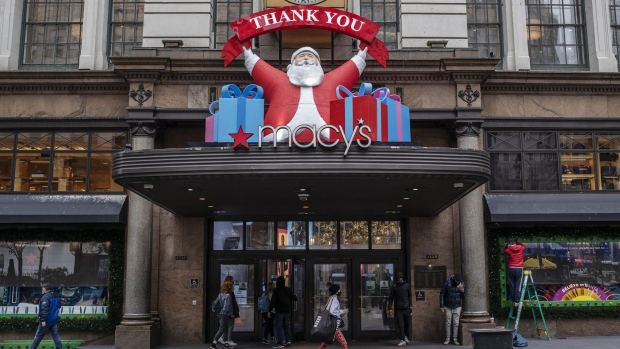 Pedestrians pass in front of a holiday Santa Claus sign outside the Macy's Inc. flagship store in the Herald Square area of New York, U.S., on Tuesday, Nov. 17, 2020. Macy's Inc. is scheduled to release earnings on November 19. , Bloomberg

U.S. retailers are so far winning the battle to keep open stores that don’t sell “essential goods” as a resurgent coronavirus brings new restrictions, a contrast from the early days of the pandemic that caused so much economic pain.

Staying open now is especially crucial with holiday shopping season entering its peak. Their core pitch is that their locations should stay open, regardless of what they sell, because they’ve spent millions on safety precautions and many are still operating at reduced capacity to ease crowds. There’s also little evidence that stores have been big spreaders of the virus. However, that hasn’t stopped other countries from closing nonessential retailers back down.

“Governors, for the most part, have not gone backward and created an essential or nonessential designation,” said Jason Brewer, executive vice president of communications and state affairs at the Retail Industry Leaders Association. States like New York, Illinois, California and Pennsylvania have increased restrictions without hitting the sector. “We think that’s the right thing.”

In the initial wave, states ordered businesses to close, but had an exception for companies selling essential goods or services. This created a huge divide in retail. Big-box stores, like Target Corp. and Home Depot Inc., reaped the benefits of staying open because they sold vital items, such as toilet paper, food and tools. Meanwhile, everyone else got crushed, causing thousands of job cuts. Among department stores, second-quarter revenue fell 35 per cent at Macy’s Inc. and 52 per cent at Nordstrom Inc., and J.C. Penney Co. filed for bankruptcy.

Like many chains, Macy’s responded to the closures by expanding its e-commerce offerings, but that failed to make up for the sales hit caused by all its stores being shuttered. Since reopening, it has required shoppers to wear masks, plexiglass covers checkout counters and hand sanitizer stations are located throughout each store.

Those measures have brought back customers, and increased investor optimism that the sector is on the rebound. In making the case to stay open, Chief Executive Officer Jeff Gennette said it can safely operate, even if cases keep rising.

“We don’t believe the designation of essential and nonessential should play in retail,” Gennette said last week on an earnings call with analysts. Instead, each store should be “held accountable to health and safety standards.”

Specific super-spreader events haven’t been documented at retail stores, like they have other establishments, according to Lisa Lee, a public health expert and associate vice president for research and innovation at Virginia Tech. Bars and restaurants where people are drinking and letting their guards down are more likely spread the virus, she said.

“We no longer are living in a time where we go to a department store to browse around for a few hours,” Lee said. But governments and retailers still have to “thread that needle to make it safe enough for people to go and not turn it into a situation that is as risky as a bar or a restaurant.”

There is not a national order categorizing retailers into these groups. Instead, each state decides for itself. That’s why there is still concern that some states might reissue orders mirroring the first wave, according to David French, senior vice president of government relations at the National Retail Federation. New Mexico is the only state that’s made a delineation between essential and nonessential when ordering new restrictions, he said.

RILA, the trade group, sent a letter to some governors earlier this month, calling the nonessential distinction “outdated” and said government action should be based on how safe retailers have made their stores, instead of designations about what a chain sells.

The retail industry now sees its message working, especially after all the job losses and hits to local economies.

“Most of the governors don’t want to go back to an economy where everyone is shut in and the entire economy is shut down,” NRF’s French said. “That was the strategy in March. They are trying to be more nuanced now."