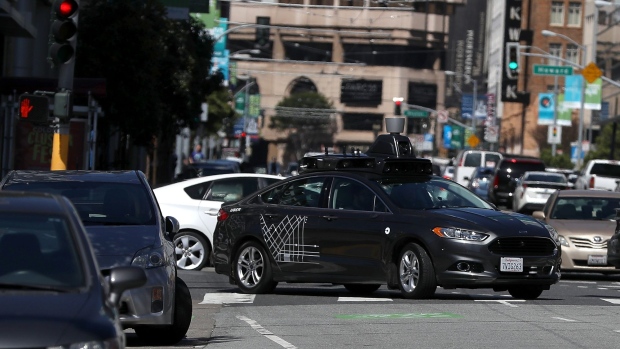 After replac Travis Kalanick in 2017, Khosrowshahi placed the self-driving program on the back burner while working to restore Uber’s reputation. Photographer: Akio Kon/Bloomberg , Bloomberg

With deep pockets, some of the best brains in robotics and its hallmark hustle, Uber Technologies Inc. was once a serious contender in the race to build self-driving cars and revolutionize global transportation.

Today, the effort is lagging far behind rivals, and investors are getting antsy about the rationale for continuing a long-term science project that isn’t helping Uber become profitable or safeguarding its future.

In recent months, the company’s two largest shareholders, SoftBank Group Corp. and the venture firm Benchmark, have privately encouraged Chief Executive Officer Dara Khosrowshahi to find more investors for the division, which is expected to exhaust its funds by the end of 2021, and re-evaluate its strategy, according to people familiar with the situation.

Khosrowshahi is exploring various options. One would see Uber accelerating the project by open-sourcing it to coders around the world, said the people, who requested anonymity to speak about a private matter. Or the company could continue building a proprietary car with money from existing partners, Toyota Motor Corp. and Denso Corp., and possibly new ones, they said.

It’s an existential decision because without a fleet of autonomous vehicles, Uber risks losing its grip on the ride-hailing market to any number of companies, from Alphabet Inc.’s well-established Waymo unit to upstarts like Amazon.com Inc.’s Zoox, which recently got the green light to test autonomous vehicles on California roads without a safety driver.

PitchBook mobility analyst Asad Hussain describes a nightmare scenario where Waymo develops its own network, Amazon gives free rides to Prime subscribers, and Uber becomes irrelevant. “Self-driving is the next smartphone,” he said. “You don’t want to get left out.”

When Khosrowshahi assumed Uber’s helm from ousted founder Travis Kalanick in 2017, he inherited a mess of cultural, strategic and financial problems. Khosrowshahi set to fixing the most pressing ones first, repairing Uber’s reputation and values and offloading losing bets in overseas food delivery and ride networks; the self-driving group went on the back burner.

Work didn’t stop, but the division was badly demoralized by a pair of events: the conviction and imprisonment of its former chief, Anthony Levandowski, for stealing intellectual property from Waymo, and the 2018 death of a pedestrian struck by an Uber vehicle in Phoenix, Arizona, while the human driver was watching “The Voice” on her cell phone.

Last year Khosrowshahi bought himself some time by turning the autonomous driving division, called the Advanced Technologies Group, into an $8 billion subsidiary with its own set of investors, including SoftBank, Denso and Toyota, to help fund an operation that’s consuming about US$500 million a year.  The move helped silence critics because Uber no longer needed to bear the costs alone, but it didn’t address the more fundamental question of strategy and whether Uber should be in the business of building its own autonomous driving technology.

Investors and executives including former Uber Chief Technology Officer Thuan Pham have said that open-sourcing ATG’s self-driving technology would speed development and establish Uber as a leader, similar to how Google’s open-source Android mobile operating system created an alternative to Apple. Going this route would require Uber to release the source code and grant rights to everyone interested in using, changing, studying and distributing it however they choose. Proponents say this would let Uber remain on the cutting edge while progressing faster because the work would be done collaboratively by coders around the globe.

“There’s no question in my mind that [open source] is the perfect solution for a highly complex problem,” said Benchmark’s Bill Gurley, who added that the move would boost Uber’s share price by as much as 20%. “I would sacrifice whatever value there might be to lead an open-source movement to get the company to a better place faster. I’m highly confident the market would respond to that.”

Khosrowshahi earlier this year directed ATG chief Eric Meyhofer to explore the idea, according to people with knowledge of the situation, who said the conversation quickly became “contentious.”

Meyhofer confirmed the conversation and, although he disagrees with that characterization, he does believe the idea of open-sourcing ATG’s technology is “too complicated.”

“Open sourcing opens a can of worms,” he said. “We don’t think it makes sense for our strategy.”

Amid the infighting, Uber’s partnerships with other self-driving companies have withered. The original idea was to have a backup in case Uber’s proprietary effort was late or didn’t come to fruition. That’s why Uber struck a deal with Daimler AG back in 2017 to put Daimler’s own self-driving cars on Uber’s ride network.

But all new work with the German automaker has ceased, according to people with knowledge of the matter.  Uber tentatively agreed to work with Motional, with tests planned for later this year, but several ATG employees advocating for the partnership have left, putting the deal in purgatory, the people said. A spokeswoman for Daimler said cooperation with Uber is ongoing but “currently on hold.”

Meyhofer said ATG “remains interested in and committed to pursuing partnership opportunities that serve our mission of bringing safe, reliable self-driving technologies to the Uber platform.” He declined to comment on details of the existing Motional arrangement, but said no “deal” has been signed and nothing is set to be tested in 2020. Motional said it would be “premature” to comment on the status of conversations with Uber and other ride-share companies.

Work on Uber’s own autonomous technology isn’t going well either. ATG engineers are in the midst of replacing the software platform the company has been licensing from Carnegie Melon University since 2015. Originally, the project was going to take six months, but that deadline has been pushed out to more than 18 months, according to people familiar with the work. Earlier this year, cars running on the new platform occasionally lost computing power, going just a few hundred yards before stopping, the people said. Then, just as some of those initial kinks were being worked out, Covid-19 hit.

ATG suspended all testing apart from simulation work for a “brief period,” until it could ensure employees would be able to safely resume work, according to its financial report for the period ending June 30.

Today, five years after Uber launched its self-driving effort, the company operates vehicles in the nation’s capital but only with the autonomous system turned off. In Pittsburgh, meanwhile, the autonomous system is engaged only “as needed,” with a human driving the rest of the time. Khosrowshahi has little in the way of milestones to show potential investors.