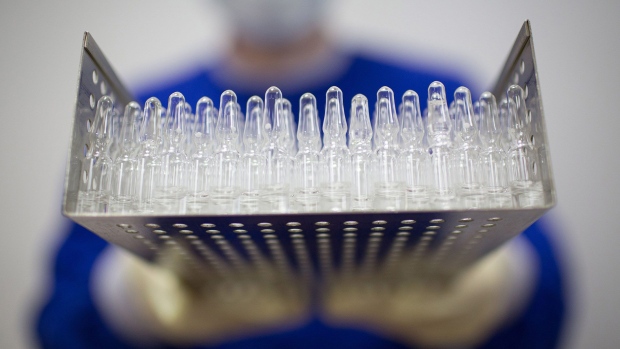 Makers of the leading coronavirus vaccine candidates disclosed detailed information about their pivotal late-stage clinical trials and how they plan to gauge their shots’ safety and effectiveness.

The moves by first Moderna Inc., and then later from Pfizer Inc. and its partner BioNTech SE, follow increasing worry that the effort to develop a COVID-19 vaccine is becoming politicized, and that an inoculation could be rushed to market before it is proven safe and effective. AstraZeneca Plc said in an email it would share its plans as well, though it hadn’t as of Thursday evening in the U.S.

Moderna released its plan ahead of an early Thursday morning investor meeting. The Cambridge, Massachusetts-based biotechnology company decided to share its full trial design to create public confidence that it’s doing everything it can to ensure a vaccine works and won’t cause harm, said Chief Executive Officer Stephane Bancel. The move resulted in a snowball of information that’s not often available to the general public and broader science community.

Pfizer soon followed Moderna, publishing its trial design in the form of a 137-page document that details under what circumstances the trial could generate early efficacy results. AstraZeneca later shared its own plans to its website as well.

While the broad outlines of major drug trials are available on a U.S. government website, details of how and when monitoring boards overseeing the trials plan to analyze data are often kept confidential by pharmaceutical companies.

However, the unprecedented push to get a vaccine to market quickly has increased interest in those details. The analysis of findings and what the rules are for stopping a trial if there are encouraging early signals could determine how quickly a shot receives emergency authorization from U.S. regulators.

“We have been working nine months to try to stop this virus by getting a vaccine to market,” Bancel said in an interview. “We want to make sure the general public has trust in vaccines by being transparent.”

Bancel said the most likely scenario was that Moderna’s vaccine could generate preliminary efficacy data in November. It is “technically possible” for Moderna to get results in October, but this is unlikely, he said.

Under the Moderna plan, a data monitoring board will take a preliminary look at the efficacy results after 53 participants have contracted the coronavirus, and again after 106 cases are reached. The final analysis will occur after 151 cases, according to slides from the investor meeting.

According to a slide being presented at the meeting, Moderna’s trial is only likely to generate clear positive results at the first analysis if it turns out to be very highly effective, reducing COVID-19 cases by 74 per cent or more.

If the vaccine turns out to be a more modest 60 per cent effective, the trial might have to proceed to the final efficacy readout in order to generate clear results, according to Moderna’s 135-page trial protocol.

Moderna’s plan is more conservative than the 32-case benchmark being used by Pfizer Inc. for its first preliminary analysis of the COVID-19 vaccine it’s developing with Germany’s BioNTech. Additional efficacy analyses will take place when the companies identify 62 and 92 cases. Pfizer has said conclusive efficacy results are likely by the end of October.

Eric Topol, the editor-in-chief of Medscape and a professor of molecular medicine at The Scripps Research Institute, wrote in an email that “aggressive” would be “too kind” of a way to describe the trial design, which “has the optics of wanting (engineering) the trial to stop early which is not good.”

A complete safety and efficacy analysis will take place six months after patients in the late-stage trial receive a second shot.

Bancel said “it is extremely unlikely” everyone in the country could get vaccinated by the end of the first quarter of 2021, as a Trump administration official suggested on Wednesday. All three of the most likely initial vaccines are based on newer technologies, which means that the companies have had to create new manufacturing capacity, he said.

There will likely only be enough vaccines approved for every American who wants a shot by the second half of next year, according to Bancel.