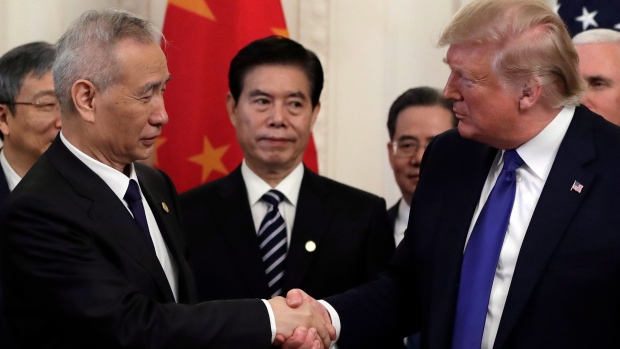 President Donald Trump shakes hands with Chinese Vice Premier Liu He, after signing a trade agreement in the East Room of the White House, Wednesday, Jan. 15, 2020, in Washington. , The Associated Press

Tension between the world’s two largest economies over the coronavirus pandemic drove an exodus from two ETFs tracking Chinese companies.

Traders pulled a record US$193 million from KraneShares CSI China Internet Fund on Tuesday, according to data compiled by Bloomberg. The US$2.1 billion ETF, ticker KWEB, has giants such as Tencent and Alibaba among its top holdings. Meanwhile, BlackRock’s US$3.8 billion iShares China Large-Cap exchange-traded fund, or FXI, saw its biggest drawdown since July.

The renewed friction between Washington and Beijing threatens to undermine a trade deal signed only months ago, further jeopardizing global economic prospects. 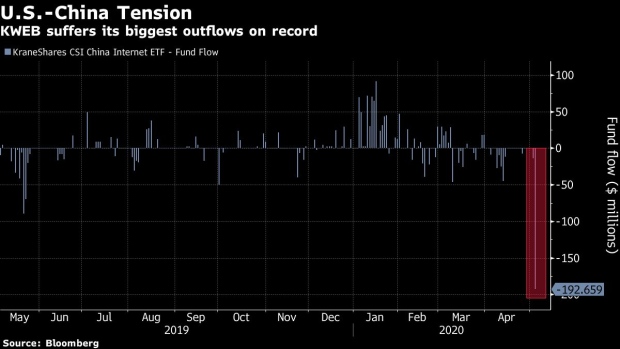 China has fired back at U.S. Secretary of State Michael Pompeo, saying he has no evidence to back up claims that the virus that causes Covid-19 escaped from a laboratory in the central city of Wuhan. Early sympathy for China’s plight has given way to increased tensions around the world, from the U.S. to Europe and Australia.

“As G-7 nations start to look toward China’s government to place blame on them about the Covid-19 outbreak and its source, sentiment has clearly started to change,” said James Pillow, managing director at Moors & Cabot Inc.

After suffering a drawdown of more than US$400 million in April, China-focused ETFs have seen outflows of about US$87 million in early May, according to data compiled by Bloomberg. Even after rallying last month, FXI has fallen more than 12 per cent in 2020, while KWEB is down about 2.5 per cent.

Philip Lawlor, FTSE Russell’s managing director of global markets research, said the flows could be from profit-taking and fears that President Donald Trump will maintain his anti-China rhetoric through the 2020 election.

“His deflection strategy is clearly going to be placing all the blame on China and launching an attack on China in terms of economic sanctions,” he said. “The market is aware we are lining up for a confrontational second half of the year.”