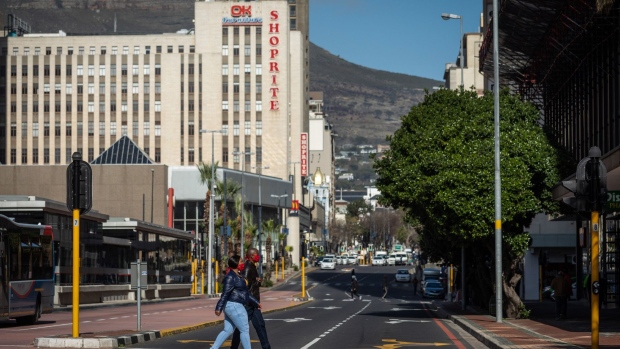 (Bloomberg) -- The coronavirus pandemic could bring positive changes to Africa’s economies even if output shrinks by as much as 10% this year, according to a new investment report.

There are already signs that the continent will be disproportionately hit by the outbreak that has raised risks and worsened the investment climate after years of progress, according to the latest Africa Risk-Reward Index report. The index, which compares market opportunities and risks in the region, was developed by risk consultancy Control Risks and research firm NKC African Economics, based in Paarl, outside Cape Town.

Rising stars like Ethiopia have seen a sharp drop in their reward score as risks shoot up on heightened ethnic tensions amid a delay in elections in the continent’s second-most populous nation. Senegal, which has averaged growth of 6% in the last five years, was among the five countries that fell the most in their overall position on the index since 2018.

Gross domestic product on the continent will likely contract 6% to 10% this year with higher debts leading to more frequent financial crises, according to the report. Dwindling revenues will mean many African countries have less firepower to respond the pandemic and stoke a quick recovery, it said.

Despite these difficulties and expectations of a long and uneven recovery, foreign investors fleeing the continent could be making a mistake, the firms said. That’s because “in some markets, Covid-19 has given new impetus to positive reforms,” according to the report.

Efforts to diversify commodity-dependent economies, deepen domestic financial markets and formalize the labor force could gain momentum in the wake of the pandemic, which forced countries to close borders and lockdown cities.

“Substantial changes will both serve the continent’s people well and justify a renewed excitement in Africa as an investment destination,” the report said.