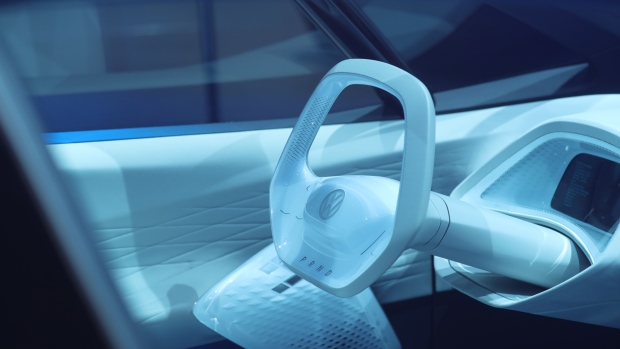 A Volkswagen AG I.D. concept electric automobile sits on display as the automaker announces the 'VW 2025' strategy plan at VW's headquarters in Wolfsburg, Germany, on Tuesday, Nov. 22, 2016. VW is going on the offensive in North America, challenging the likes of General Motors Co. and Ford Motor Co. with a wave of new sport utility vehicles and battery-powered cars. Photographer: Krisztian Bocsi/Bloomberg , Bloomberg

Volkswagen AG and Ford Motor Co. are pushing ahead with plans to team up on electric and self-driving vehicles even as the coronavirus derails other projects, according to people familiar with the matter.

The deal is expected to close by the end of next month, with both sides recognizing a need to share the large investments needed to develop battery-powered and autonomous cars, said the people, who asked not to be identified as the negotiations are private.

The talks with Ford are progressing well, a VW spokesman said by phone, without giving further details. Alan Hall, a representative of Ford’s autonomous-car partner Argo AI LLC, said the plan is on track to close in the second quarter. Ford said separately it expects the same.

With the global pandemic bringing the automotive industry to its knees, both companies are keener than ever to move beyond an initial agreement to join forces on light commercial vehicles and mid-size pickups. Manufacturers are being forced to rein in spending amid falling demand for cars, and sharing expenses for new technology can help ease the financial burden.

Moody’s Investors Service revised its 2020 global auto sales this week to an anticipated slump of 20 per cent, worse than its previous expectation for a 14 per cent decline. “Our more-pessimistic view is largely based on the darkening outlook for the global economy,” the ratings company said. The auto industry is “likely to resume growth in 2021 off a diminished base.”

With demand shrinking and capital constraints mounting, the industry is going to be forced to consolidate the number of powertrain types they choose to develop going forward, said Dietmar Ostermann, a PwC senior partner.

“The transition into electric vehicles will actually be accelerated, because the industry cannot afford too many alternative propulsion systems going on at the same time,” Ostermann, PwC’s U.S. automotive advisory leader, said during a webinar hosted by Automotive News on Thursday.

Under the plan, VW will invest about US$2.6 billion in Argo. That includes US$1 billion in funding and the US$1.6 billion Autonomous Intelligent Driving unit of the German company’s Audi brand to compete with Alphabet Inc.’s Waymo and General Motors Co.’s Cruise unit.

VW’s investment in Argo remains on track for the first half, Ford said in a statement.

Ford’s strategy has been set back by the viral outbreak, with a multi-city commercial rollout of robotaxis and driverless delivery pods in the U.S. delayed until 2022. The company says it needs more time to assess the impact of the coronavirus pandemic on consumer attitudes toward self-driving and shared vehicles. It’s also canceled plans to jointly develop an all-electric Lincoln model with Rivian Automotive Inc.

As part of the widened cooperation, Ford intends to produce at least one mass-market car in Europe based on VW’s main electric-vehicle underpinnings, dubbed MEB, with more than 600,000 targeted deliveries over six years. VW’s first car based on the new technology, the ID.3 hatchback, will be rolled out this summer. The SUV sibling called ID.4 is set to follow later this year.

The planned collaboration in the light commercial-vehicle segment focuses on mid-size pickups and vans that are scheduled to be launched as early as 2022.