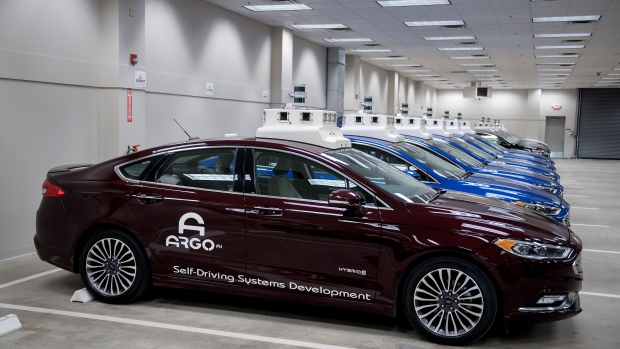 Volkswagen AG will invest in Ford Motor Co.’s autonomous-car partner Argo AI at a valuation of about US$7 billion as two of the world’s largest automakers expand an alliance formedearlier this year, according to people familiar with the matter.

In addition to backing the Ford affiliate, VW will fold its Audi division’s Autonomous Intelligent Driving unit into Argo, said the people, who asked not to be identified ahead of an official announcement. VW and Ford’s chief executive officers have scheduled a briefing for 8 a.m. Friday in New York.

A VW spokesman declined to comment, while representatives for Ford and Argo didn’t immediately respond to messages. VW and Ford also are expected to announce they’ll cooperate on electric vehicles, after already having agreed to a commercial van and mid-size truck tie-up in January.

VW-Ford alliance amps up the pressure on other automakers

The deal suggests VW has taken a fonder view of how much Argo is worth in the course of just a few months. In February, VW and Ford discussed an approximate valuation of US$4 billion, a person familiar with their deliberations said.

Argo’s founders, Bryan Salesky and Peter Rander, left leadership roles at Alphabet Inc.’s Google and Uber Technologies Inc. to start the company with US$1 billion in backing from Ford.

By joining forces on autonomous vehicles, VW and Ford are positioning Argo as a challenger to the likes of Alphabet Inc.’s Waymo and General Motors Co.’s Cruise unit.

VW cleared the way for a deal with Argo by backing out of a partnership with Silicon Valley startup Aurora Innovation Inc. last month. Aurora is led by the former heads of Google’s self-driving car project and Tesla Inc.’s Autopilot team and has raised money from the likes of Amazon.com Inc. and Sequoia Capital.