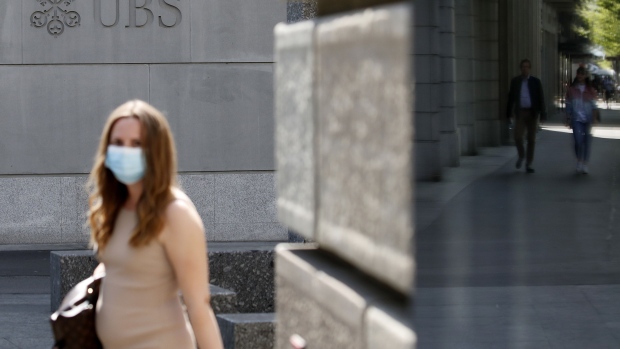 A pedestrian wearing a protective face mask walks past the UBS Group AG headquarters in Zurich, Switzerland, on Friday, April 17, 2020. A UBS appeal of a record 4.5 billion-euro ($4.9 billion) French fine for helping clients stash undeclared funds in offshore accounts was postponed over concerns related to coronavirus pandemic, according to people familiar with the case. Photographer: Angel Garcia/Bloomberg , Bloomberg

The fallout from coronavirus has provoked fears among the world’s wealthy, with the majority planning to curtail travel and move closer to family in a world they see permanently altered by the pandemic.

More than half of respondents in a survey of wealthy investors by UBS Group AG said they feared not having enough liquidity in the event of another pandemic, while a similar percentage expressed worry about leaving sufficient money to their heirs.

The crisis “feels very personal,” said Bonnie Park, head of wealth planning for UBS in the Americas. “In the U.S. specifically, 82 per cent of investors feel their lives have changed permanently.”

To be sure, the poor and working classes have borne the brunt of the economic fallout from COVID-19, which has triggered the worst economic contraction since the Great Depression and resulted in tens of millions of layoffs. Of the wealthy investors surveyed, 70 per cent said they’d been financially affected by the pandemic, with 36 per cent of those describing the impact as “significant.”

Younger investors indicated they were disproportionately affected by COVID turmoil. More than 70 per cent of wealthy millennials said their finances were impacted by the pandemic and a similar percentage said they anticipated having to work longer to make up for the losses, compared with just 34 per cent of Baby Boomers. Millennials were also twice as likely as boomers to have extended financial support to family and friends.

Despite any damage to their net worth, most wealthy investors see the recent volatility in the equity markets as a buying opportunity.

“We saw some investors shift out of equities and 60 per cent of them regret that,” said Jeff Scott, UBS’s head of client research. “Better to stick with your plan than be reactive in the market.”

Investments aside, wealthy people are expecting to make permanent changes to their lifestyles in the wake of the coronavirus. More than two-thirds are prepared to work remotely, while 70 per cent anticipate traveling less in the future and just over half are planning to move closer to family.

Wealthy Europeans expressed stronger sentiment toward moving away from cities to less populated areas than those in the U.S., with more than half saying they desired such a move compared with 30 per cent of rich Americans.