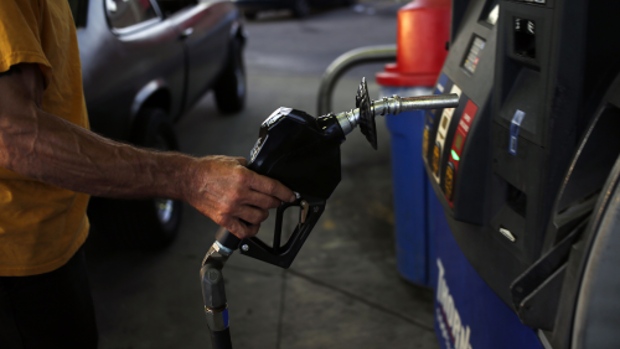 A customer refuels a vehicle at a Thornton's Inc. gas station in New Albany, Indiana, U.S., on Thursday, June 27, 2019. The national average for unleaded fuel is $2.72 a gallon, down 15 cents from last year's Fourth of July holiday. The lower prices are motivating a record number to hit the road, with 41.4 million commuters expected to travel by automobile, according to AAA. , Bloomberg

U.S. consumer prices posted the biggest monthly gain since 2012 on a rebound in gasoline costs, though inflation remained subdued more broadly amid the pandemic.

The consumer price index jumped 0.6 per cent from the prior month, the first increase since February, after a 0.1 per cent drop in May, Labor Department figures showed Tuesday. The median forecast in a Bloomberg survey of economists called for a 0.5 per cent increase. Compared with a year earlier, the gauge increased 0.6 per cent.

Gasoline prices jumped 12.3 per cent and accounted for more than half the gain in the overall CPI. Even with the sharp increase, gas prices are down 23.4 per cent from June 2019.

Excluding volatile food and fuel costs, the so-called core CPI rose a more moderate 0.2 per cent, restrained by a slowdown in rents, from the prior month after a 0.1 per cent decrease in May. On an annual basis, core inflation increased 1.2 per cent for a second month.

As more states started to reopen their economies in June, the pickup in demand for goods and services helped to stabilize prices. At the same time, a spike in the number of cases in Sun Belt states including Florida, Arizona and Texas threatens to restrain sales and inflation.

“The CPI June results do reinforce that in an environment of persistent excess capacity and high unemployment, the net impact will be disinflation. Large slow-moving service categories, including shelter costs, are set to restrain inflation trends over a longer period.”

The government’s report showed all energy costs climbed 5.1 per cent in June from a month earlier.

Food prices, meanwhile, continued to rise. The cost of groceries rose 0.7 per cent from the prior month as Americans continued to eat more meals at home amid the pandemic. Such prices were up 5.6 per cent from a year ago, the largest increase since 2011.

Households paid 1.2 per cent more for goods in June compared with a month earlier, the biggest gain since June 2009. The cost of services, which make up the majority of the CPI, increased 0.2 per cent. Rent of primary residence rose just 0.1 per cent, the smallest monthly advance since April 2011.

The slowdown likely reflects “a drop in demand in major cities forcing landlords to reduce rents for new tenants,” Ian Shepherdson, chief economist at Pantheon Macroeconomics, said in a note.

Car insurance prices rebounded in June after a sharp decline, while apparel and airfares also picked up.

A separate Labor Department report on Tuesday showed average hourly earnings, adjusted for price changes, rose 4.3 per cent in June from a year earlier after a 6.4 per cent gain a month earlier. The figures have been boosted by declining numbers of low-wage workers in the workforce.

The government’s report on consumer prices followed data last week that showed producer prices declined unexpectedly in June, partially due to a 27.7 per cent slump in the cost of meat.

Pricing power has diminished since the economy entered a recession in February, which is seen as a limit to inflation at the consumer level.

--With assistance from Sophie Caronello.