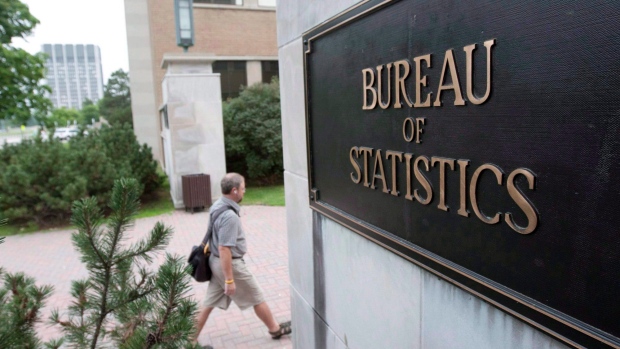 An employee makes his way to work at Statistics Canada, in Ottawa in a July 21, 2010, file photo. , The Canadian Press

OTTAWA -- Statistics Canada says Canadians' buying patterns changed so much during the COVID-19 pandemic that its measure of consumer inflation went a little wobbly.

The agency previously reported that year-over-year inflation declined by 0.2 per cent in April, then took a further drop of 0.4 per cent in May as lockdowns put a damper on consumer spending.

But a look under the headline figures showed consumers were spending more on items that don't weigh as much in the consumer price index, which tracks inflation. And they were spending less on things that weigh more in the calculation.

In a numbers experiment to better reflect pandemic spending, Statistics Canada found the annualized inflation figures for April and May would have been 0.0 and -0.1 per cent.

The research paper made public Monday says a specific consumption pattern, such as that happening during the pandemic, would need "to be sustained in order to have a subsequent impact" on year-over-year headline numbers.

The research was aided by data from the Bank of Canada, which targets an annual inflation rate of two per cent as measured by Statistics Canada's consumer price index.

The bank has warned that the economic shock wrought by COVID-19 and structurally low interest rates is having a deep effect on the inflation rate, which is far below the target.

The basket of goods used to form the consumer price index has been shaken by a shift in consumer spending habits during the pandemic.

People are buying less gasoline, which usually receives a heavier weight in calculating inflation, as its price has plunged and the frequency of car travel has dropped. Canadians are travelling much less, while grocery-buying is up.

Statistics Canada is to report June's inflation rate next week.

The Bank of Canada said in April that it expected inflation to be close to zero in the second quarter.

Beyond the end of June, the bank was less clear, citing the high level of uncertainty around the course of the pandemic.

The federal government's economic "snapshot" last week pegged inflation at 0.5 per cent for this year, then rising back to two per cent in 2021.

The reading was based on the average of forecasts from 13 private sector economists.

On Wednesday, the central bank will release its updated outlook. Governor Tiff Macklem has described what's coming as a "central planning scenario" for the economy and inflation, as well as related risks — such as local, but not national, lockdowns.