Masayoshi Son is paying the price for bold bets on startups from WeWork to Uber Technologies Inc.

The founder of Japan’s SoftBank Group Corp. has seen his net worth slide about US$6 billion from its peak this year after his strategy of aggressively backing technology pioneers backfired. His fortune tumbled to roughly US$13.8 billion as of Tuesday, according to the Bloomberg Billionaires Index, after peaking in July at about US$20 billion.

Son will give details of the damage on Wednesday when his Japanese conglomerate reports earnings, including likely writedowns for Uber and WeWork. The Vision Fund, its primary investment vehicle for startups, is said to be planning to swallow a charge of at least US$5 billion. Some of that stems from the spectacular implosion of WeWork, the once-celebrated co-working company that SoftBank is now bailing out after systemic governance failures tanked its IPO attempt. The U.S. company, which raised money at a US$47-billion valuation in January, was said to be valued at less than US$8 billion in the rescue package.

“Son has been through a number of ups and downs before, but it seems like these days he’s taking on more and more risk,” said Mitsushige Akino, an executive officer with Ichiyoshi Asset Management Co. in Tokyo. “What’s really spooking investors is that they don’t know if WeWork is just the tip of the iceberg for SoftBank’s trouble.”

Uber and WeWork, once among the brightest stars in the SoftBank constellation, now number among its worst performers. Their shrinking valuations have called into question Son’s investment credibility at a time he’s trying to raise an even larger successor to his original mega fund.

Analysts expect SoftBank to post a net loss of about 300 billion yen in the quarter (US$2.8 billion), compared with a profit of more than 500 billion yen a year earlier. Shares of Uber tumbled 34 per cent in the third quarter, while Slack Technologies Inc., another SoftBank investee, dropped 37 per cent. The poor public performance of its marquee investments also raises the question of whether the Vision Fund should reassess the valuations of other growth-focused companies in its portfolio, from ride-hailing giants Didi Chuxing and Grab Holdings Inc. to hotel startup OYO Rooms and food delivery app DoorDash Inc.

SoftBank may book a US$3.54-billion drop in the value of its Uber stake, a US$750-million decline for Guardant Health Inc., and take a US$350-million hit for Slack, according to Chris Lane, an analyst at Sanford C. Bernstein. The combined writedown for WeWork may be as much as US$2.82 billion, assuming a slide in the company’s valuation to US$15 billion from US$24 billion, but remains uncertain. He said his estimates represented a worst-case scenario and may be offset by gains from other unlisted companies. 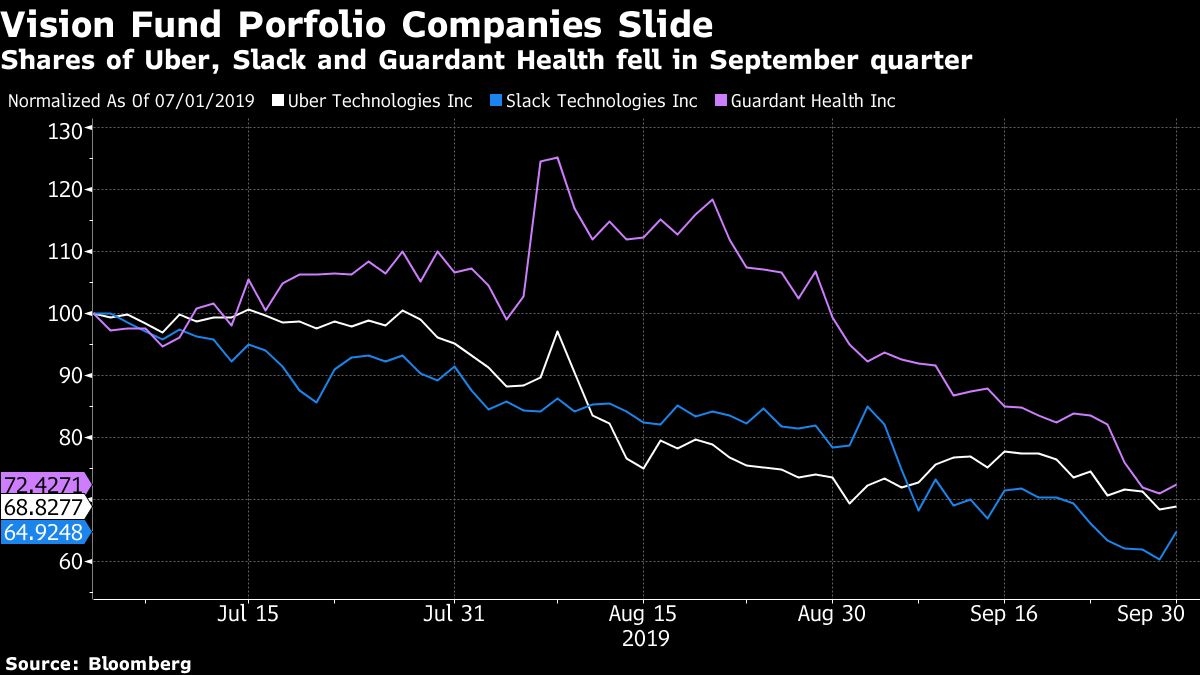 Son has a lot at stake personally. His net worth excludes US$8.3 billion worth of SoftBank shares he put up as collateral for personal loans from 19 banks, including Credit Suisse Group AG and Julius Baer Group Ltd. The billionaire has pledged 38 per cent of his stake in the Japanese firm, according to a June regulatory filing. That’s up from 36 per cent at the start of the year — and triple the level in June 2013.

The 62-year-old also leveraged his stake in the Vision Fund, the world’s single largest investment pool for startups. And SoftBank’s compensation plan involves a lot of debt. Son loaned himself around US$3 billion to invest in the first Vision Fund, according to people with knowledge of the matter who asked not to be identified because the information isn’t public.

While SoftBank’s February announcement of a record 600 billion yen buyback sent its shares to a record in April, the stock has since lost most of the gains and closed at 4,294 yen in Tokyo on Tuesday.

“Son is desperate enough to potentially announce another big buyback to show his confidence in the business and the Vision Fund,” said Amir Anvarzadeh, a market strategist at Asymmetric Advisors Pte in Singapore who recently removed SoftBank from his short-sell list. “If they do, and stock jumps further, we’ll be shorting it again,” he told Bloomberg Television.