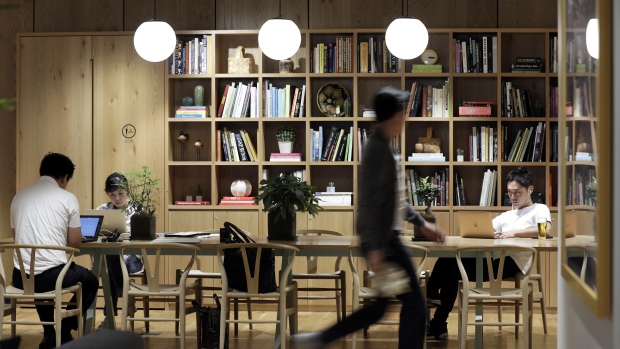 Members work on laptop computers at a communal working table inside the WeWork Ocean Gate Minatomirai co-working office space, operated by The We Company, in Yokohama, Japan, Oct. 11, 2019. Bloomberg/Kiyoshi Ota

WeWork said Friday that it added twice as many rented desks at its co-working spaces in the third quarter compared with same period the year before, even as its hotly anticipated initial public offering was imploding. The company also confirmed that it would divest businesses, including Meetup and its investment in the Wing.

The New York-based company shared new information publicly about its business that had been compiled for lenders in October for a potential debt package organized by JPMorgan Chase & Co. The data was previously only available to those who signed nondisclosure agreements, WeWork said.

As it added new members, the beleaguered company reported a drop in occupancy rate, down to 80 per cent from 83 per cent the year before. Occupancy in China and elsewhere in Asia were particularly low.

The investor presentation, which is dated Oct. 11, tries to put a positive spin on the upheaval it went through in the past few months. It describes the “member experience” for its customers as “focused.”