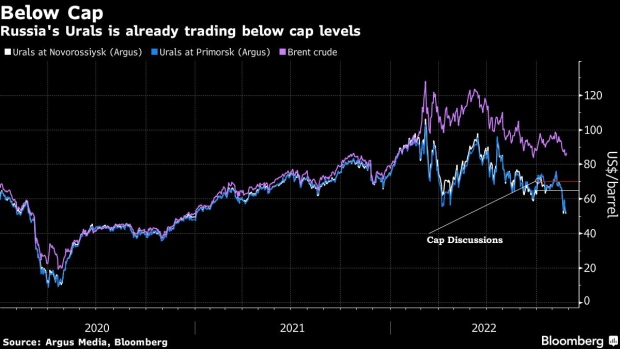 (Bloomberg) -- With European Union diplomats haggling over a price cap on Russian oil, it’s worth remembering that the level they’re discussing will almost certainly be above where the nation’s flagship grade currently trades.

European Union diplomats have this week been discussing a cap at somewhere around the $65-to-$70-a-barrel mark. When it does get imposed, the limit is expected to be adopted by all Group of Seven nations in a process that the US has led.

But anything in that range would be far above the current price of Russia’s flagship Urals grade, according to data provided by Argus Media Ltd., a publisher of physical commodity prices. Urals fell to around $52 a barrel on Thursday at two of the country’s key western export terminals, the firm’s data show.

Any buyer paying more than the cap will not be allowed to access European -- especially Greek -- oil tankers, or industry standard insurance against risks like oil spills. The higher it is, the more favorable to exports.

If the cap were to be agreed in the $65-to-$70 range, Russia and its customers could get higher prices and be certain of their ability to access the necessary vessels.

Currently they are not, creating an uncertainty about cargo transportation and a potential deterrent for some buyers. The EU itself will ban almost all seaborne imports from Dec. 5.

The bloc is still in extended talks on the cap. Some members, such as Poland, regard $65 as being too soft on Moscow, while members like Greece, the world’s top oil-tanker owning nation, doesn’t want to go below $70.

A cap wouldn’t be a complete win for Moscow. Oil prices can rise as well as fall, and if the cap becomes an entrenched part of the market, Russia could miss out on future rallies.

There is significant uncertainty about Russian oil prices because trading of the nation’s cargoes has become less transparent since the war. However, Platts, a price-publisher that’s part of S&P Global Inc., also assessed the price of Urals at the Russian port of Primorsk at around $52 on Thursday, according to people familiar with the matter.

The Argus price is used by Russia’s finance ministry to calculate export duties.

Consultant FGE said in a note that the cap poses little downside to current realized prices and could even equate to a $3-$4 upside for Urals.