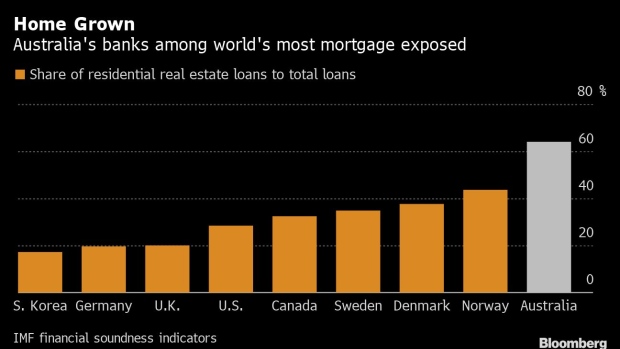 Residential homes near Bondi Beach in Sydney. The statistics office estimates the value of the nation’s residential dwellings was A$7.1 trillion in the June quarter. , Bloomberg

Economists had predicted property prices would tumble 10% or more as Covid-19 swept Australia; now, they’re scrambling to reverse those forecasts to gains of 5-15% in the next couple of years. Policy makers have switched from worrying about plunging prices to being on guard for excessive exuberance.

A recent Saturday auction at the Sydney suburb of Forest Lodge -- around 2.5 miles from the city center -- captured the bullish mood. About 30 people gathered in front a four bedroom Victorian terrace up for auction. The bidders -- ranging from younger professionals to middle-aged people -- kicked off at A$2.4 million and moved up in increments of A$10,000, then A$5,000, until the hammer came down at A$2.74 million.

It’s a dynamic that’s emerging in other countries as low interest rates fuel asset prices. While the housing strength is good news for the economy’s recovery, to housing bears -- who have been proved wrong time and again for a generation in Australia -- further gains risk fueling the bubble that is destined to pop one day, leaving a trail of bad debts.

The lending books of Australia’s banks are among the world’s most exposed to mortgages, with housing loans at the major four banks equating to about 75% of the nation’s approximately A$2 trillion gross domestic product. The statistics office estimates the value of the nation’s residential dwellings was A$7.1 trillion in the June quarter, when the weighted average prices in capital cities rose 6.2% from a year earlier.

Behind the bonanza are interest rates at levels unseen in Australia before. Three of the nation’s four big banks are offering fixed-rate mortgages below 2%, and HSBC Holdings Plc. is offering 1.88%, according to Mortgage Choice Ltd.. a broker. That’s been facilitated by the Reserve Bank of Australia cutting its interest rate to 0.10%, as well as its bond-buying and bank lending programs that aim to lower borrowing costs across the economy.

“It’s not a place I think anybody thought we would be,” said Susan Mitchell, chief executive officer of Mortgage Choice. “There’s a lot of stimulus. I’m a bit worried about prices spiking up.”

RBA modeling found that even in a scenario where the economy contracted by 20% and unemployment soared to 20%, banks still wouldn’t breach minimum prudential capital requirements. “The likelihood of a major bank failing is very low,” it says.

The RBA has made clear that reducing unemployment is its priority for now, rather than worrying about asset prices. Governor Philip Lowe has said the absence of population growth -- with international borders still closed -- changes housing market dynamics and he doesn’t think an unsustainable increase in housing prices is likely.

Yet there are tools should the situation change.

“We know from the experience of recent years that the macroprudential instruments can curtail the growth in debt in a stabilizing way. So it’s an issue we’re watching carefully, but I’m not particularly worried about it at the moment,” Lowe said during a panel at the Australian’s Strategic Forum 2020 on Wednesday.

By contrast in New Zealand, where some regions are recording double-digit house price gains despite the worst recession in a century, economists expect loan-to-valuation ratio restrictions will be put in place early next year.

“Weaker lending standards mean people will be loaded up with as much debt as possible,” she said. “There is significant profit to be made in pushing borrowers to the edge.”

Yet, much like the uneven nature of the economy’s recovery, the housing market strength isn’t uniform. Many people living in inner city apartments in Sydney and Melbourne are looking for more space.

“The virus has become a catalyst for change that is seeing us refashioning our homes and rethinking where we want to live,” said John McGrath, chief executive officer of real estate agent McGrath Ltd.

The result has been a collapse in rents and flat prices -- with more to come as apartment blocs are still under construction. That’s unlikely to hurt Australian banks, which have steered clear of developers after a recent period of over-building. But it does impact mom and pop investors.

In addition, there are households still on deferred mortgage repayments because they lost their job in the Covid lockdown. When these are scaled back and loan holidays end sometime next year, they could be forced to sell.

World-champion kite surfer Ewan Jaspan is among the sea changers. Being in a trendy St Kilda flat 24/7 with limited outside space in Melbourne wasn’t ideal, so he and his girlfriend decamped to tropical Queensland. Initially the plan was to stay for two or three weeks. That was a few months ago.

“A lot of people are working remote anyway, so why would I be in the city in a tiny apartment when I could have a garden and outside space and be at the beach?”