The world is spoiled by COVID vaccine success. Speedily developed shots have proved highly and even exceptionally effective. That made weak results revealed late Wednesday by Germany’s CureVac about its mRNA vaccine especially disappointing. Previously hyped by Elon Musk's repeated endorsement and excellent results from mRNA-vaccine compatriots Moderna Inc. and Pfizer Inc.-BioNTech SE, CureVac’s shot was found to be only 47 per cent effective at preventing COVID, sending the company’s previously buoyant shares plunging as much as 50 per cent.

The results are a setback for the global vaccination effort. The European Union ordered 405 million doses from CureVac contingent on authorization, and easy storage made the vaccine a good candidate for low-income countries.

Looked at another way, however, the failure is a step toward normalcy and shouldn't provoke broader pessimism about mRNA or increasingly prevalent virus variants, which CureVac blames for its poor results. Vaccines and drugs often fail, even those developed over longer periods and tested against easier targets than a mutating pandemic virus. The failure rate is especially high for new technologies, and drugs based on messenger RNA certainly qualify. While the company tested its vaccine in a more challenging environment than mRNA rivals, other shots appear to hold up better to variants, and CureVac used a different approach that likely contributed to its weak results. Messenger RNA technology still offers tremendous promise. 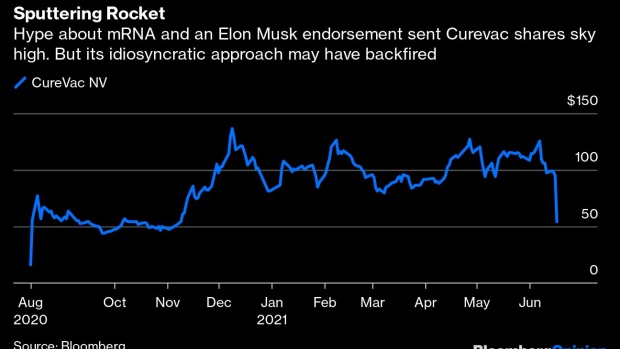 So what happened in CureVac’s case? The mRNA vaccines use the body's messenger molecules to instruct cells to produce a substance — in this case, a version of the characteristic spike protein of the virus that causes COVID — that prompts a protective immune response. However, foreign mRNA can provoke a different and undesired reaction, and both Pfizer-BioNTech and Moderna modify their vaccines to avoid it. CureVac took a different approach, based on the belief that using natural or unmodified mRNA would ultimately produce a more vigorous viral defense. It hoped this effect would help it use less mRNA per dose, allowing it to duck side effects and manufacture more shots faster. The biochemical bet appears to have failed; the trial suggests that the lower amount or the unmodified approach may reduce potency.

It will take more analysis to determine the extent to which CureVac's approach, variants or other factors contributed to the weak outcome. However, available information makes a strong case against blaming new strains alone.

The variant that caused the most cases in the trial was the alpha strain first identified in the U.K. CureVac's shot arguably should have been able to handle it. Lab tests suggest this variant isn’t especially good at avoiding vaccine-generated protection, and a different type of shot from Novavax showed a high level of protection against the strain earlier this week.

As for the more worrisome delta variant first identified in India, that strain made up about 1 per cent of cases in CureVac's trial. Substantial studies in the U.K. and Scotland suggest that two shots of Pfizer-BioNTech's vaccine offer between 79 per cent and 88 per cent protection against it, respectively. Even AstraZeneca PLC’s less potent vaccine hit 60 per cent. It’s possible that other especially elusive variants explain some of CureVac’s shortfall, but the company hasn’t yet released a breakdown of what specific strains broke through vaccine protection.

There may be a path forward for CureVac’s unmodified approach, especially as mRNA technology is applied to other diseases and even cancer. But when it comes to COVID, it appears that a modified messenger offers better results. That's bad news for CureVac investors but suggests we still have excellent tools in the pandemic fight — and possibly beyond.