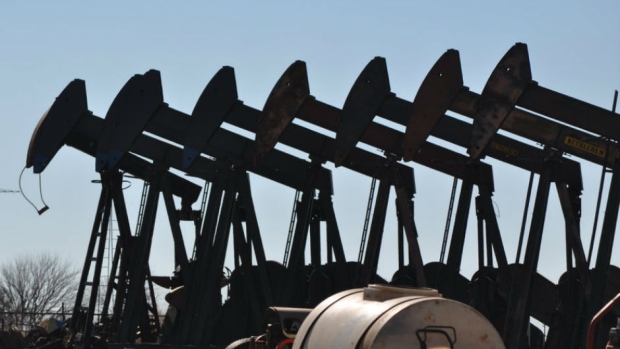 Donald Trump wants Saudi Arabia and other oil producers to stay out of the way as oil prices plunge. But the U.S. president isn’t the only leader watching the crude market, as the longest losing streak on record hits economies and tilts political battles around the world.

All told, Jamie Murray and Ziad Daoud of Bloomberg Economics reckon cheaper crude is “the symptom of slower global growth, not a new shock to the world economy." But that doesn’t mean it won’t cause some disruptions.

From Moscow to Riyadh and Beijing, here’s how the drop in prices is impacting economies and politics around the world.

Cheaper oil is bad news for Putin, whose goal of revving up growth to boost living standards is already at risk. But while Russia’s economy is reliant on the world’s highest exports of oil and gas, this drop isn’t nearly as worrisome as it was in 2014, when it tipped the ruble into meltdown and required emergency action by the central bank. Since then, the Kremlin has been battening down the financial hatches -- building up its wealth fund and tightening the budget in preparation for this as well as the risk of crippling new sanctions from the U.S. As a result, Russia can now balance its budget with oil under $50 a barrel, half the level it needed in 2014 and one of the lowest breakeven prices for a major producer. And unlike Saudi Arabia, which fixes its currency against the dollar, Russia gets some protection from the ruble, which has fallen almost 10 percent this year. That boosts the value of Russia’s oil exports in local currency terms.

Like his trade-war rival Trump, Xi may be cheering lower oil prices, even if the drop is partially due to fears that the showdown between the world’s two largest economies will dent global growth. That’s because China overtook the U.S. last year to become the world’s biggest importer, and its exports-driven economy is increasingly reliant on imported fuel. China bought a record 9.65 million barrels of oil a day in October, blowing past U.S. daily imports of about 7.5 million barrels at the time. Overseas sources account for about 70 percent of China’s total crude supply this year, up from less than half a decade ago.

Iranian President Hassan Rouhani says that U.S. sanctions against his nation are futile, but the downturn in oil prices will be particularly painful for Iran. Oil exports from OPEC’s third-largest producer have plunged almost 40 percent since April -- the month before Washington withdrew from the 2015 nuclear deal. And sanctions have already battered the rial, which lost 70 percent of its value this year. To help deal with the crunch, authorities banned the export of some basic goods to avert shortages, and are blocking imports of some luxury goods to preserve hard currency. But Rouhani is defiant: “Either Iran’s oil is exported or others will be in trouble as well," he said this week, warning of prices soaring to $150 a barrel. That helps explain why the U.S. granted waivers to three of Iran’s top buyers, allowing them to purchase a combined 860,000 barrels a day despite the sanctions.

An ambitious vision to transform Saudi Arabia’s economy being put forward by the 33-year-old crown prince is based on a realization that the oil-driven boom days could be coming to an end, and soon. The world’s largest oil exporter relies heavily on crude revenue to finance its government-dominated economy and pay for social welfare programs that reduce chances of the kinds of unrest that destabilized the region during the Arab Spring. Despite all the oil income, the nation’s finances are in disarray, though. Saudi Arabia needs oil at about US$83 a barrel to balance its budget, almost twice Russia’s so-called breakeven price. Lower oil prices will make it harder for the kingdom to reduce its twin deficits -- both its budget and current-account are in the red -- or lift capital spending to stimulate the private sector. They’ll also leave less money available for Saudi Arabia to fund a more aggressive foreign policy, which has included financing of wars in Yemen and Syria.

Crude’s collapse exacerbates an already dramatic fiscal situation for the Caribbean nation, which relies on crude shipments for 95 per cent of its export revenue. Venezuela is already behind on almost US$7 billion owed to investors and is handing over barrels as payment for legal settlements and outstanding loans. Less revenue will squeeze the few remaining social welfare programs left, exacerbate the scarcity of goods and services, and potentially fuel opposition to President Nicolas Maduro, whose years of mismanagement have made electricity and running water a luxury.

The collapse in oil prices is a much-needed boost for President Erdogan’s efforts to heal Turkey’s economy, which is stumbling from a plunge in the lira that’s led to soaring inflation and a sharp slowdown in growth. While it borders some of the world’s most plentiful oil fields, Turkey imports nearly 90 per cent of its oil, making energy a primary contributor to its current-account deficit. But the degree of benefit from lower prices will depend on the performance of the lira. A previous oil slump in 2015 coincided with a steep depreciation of the currency, limiting the positive impact on inflation, the current account and tax revenues.

The dip should be manageable for western Europe’s biggest oil producer, since its budget already assumed an oil price of below $70 for next year. If squeezed, the government could always tap into its wealth fund, like it did in 2016 and 2017 as the war chest swelled past a massive $1 trillion. Still, the drop could have some political implications. Norway expects to get about 17 percent of its budget next year from oil, and reduced income will likely increase resistance to spending demands in the current budget talks, where Christian Democrats have been arguing for more generous state support for families.

The fall in oil prices comes just in time for Prime Minister Modi, who heads into a long election season with a federal poll due by May. India is the world’s third-biggest oil consumer and meets more than 80 percent of its needs through imports, much of it from Iran. The world’s second most populous country was one of eight to receive a waiver from U.S. sanctions on Iran, and following a meeting between Modi and U.S. Vice President Mike Pence in Singapore this week, Foreign Secretary Vijay Gokhale said India would be imported more energy from the U.S. The fall in crude will also help buffer government finances, temper inflation pressures and could bring some respite to the rupee, which has led declines in Asia this year, dropping more than 11 per cent against the dollar.

Energy prices are a contentious issue in Indonesia, where authorities have raised taxes on consumer goods to reduce the current-account deficit, but left costly subsidies for fuel in place. President Joko Widodo, who’s running for re-election in April, last month ordered a reversal of a 6.9 per cent increase in the price of a widely used gasoline just hours after it was announced. Nomura listed Indonesia among the winners from cheaper oil, as Widodo pitches his vision of transforming the nation of 262 million into a manufacturing powerhouse.

Oil is Nigeria’s biggest foreign-exchange earner and the price drop will pile pressure on a budget already stretched by 66 percent increase in the minimum wage. It’s also bad timing for President Muhammadu Buhari, a 75-year-old former general whose opponents before next year’s elections already accuse him of mismanaging the economy. While Nigeria is Africa’s biggest crude producer, it imports more than 90 percent of its fuel because its own refineries are dilapidated. So a drop in oil income tends to make things harder for Nigerians, eroding the trade surplus and putting pressure on the naira. Some analysts say that could hasten the central bank’s tightening cycle, impeding growth in an economy still recovering from a 2016 contraction.

The collapse in oil prices is good news for the South African Reserve Bank, giving it room to hold off on raising interest rates this month and provide some support to an economy that plunged to a recession in the second quarter. That’s assuming the rand doesn’t weaken too much, though. The central bank forecasts inflation well above 5 per cent next year and has made it clear it will tighten policy to steer it back to the 4.5 per cent mid-point of its target range. But those projections assumed oil at an average of US$70 a barrel. If lower prices allow it to delay the tightening cycle, that could support a recovery and prop up household spending. It may even reverse part of the past year’s 20 per cent surge in gasoline prices, which further eroded consumers’ spending power.

Angola is even more dependent on oil than most other producers. Half of its gross domestic product and 90 percent of its exports are from oil production and related activities. So the crude price-drop will be a major drag on its $120 billion economy, which the IMF forecasts will contract for a third consecutive year in 2018.

Lower oil prices are a net positive for Latin America’s largest economy, and could save the country billions of reais, will reduce the cost of a diesel subsidy and potentially eliminate the need to renew it beyond December. The biggest winner is President-Elect Jair Bolsonaro, who’ll take office on Jan. 1 buoyed by a feel-good factor among consumers who’ve been pummeled by the worst recession on record. High fuel prices helped trigger a nationwide truck strike earlier this year that hurt the economy. Now Bolsonaro could be spared from having to choose between a costly subsidy or an unpopular price hike.

As low as global benchmark prices are, they’re even lower in Canada -- the country’s crude has been selling at or near a record discount to U.S. prices, amid a supply glut and a pipeline shortage. Justin Trudeau’s government has already bought a beleaguered pipeline expansion project in a bid to see it built, but the country has grappled for years with legal challenges and regulatory failures that block efforts to build new conduits. For now, it’s stuck with rising production, a single customer and a shortage of shipping options.

Oil’s slide is more of a mixed blessing than great for America’s economy. Crude in the U.S. dipped below US$55 a barrel this week for the first time in a year amid rising global supply and concerns about slowing demand. While the U.S. is still a net importer of oil, its trade deficit in petroleum products is about a third of the level just four years ago. The U.S. is now the world’s top producer -- which means the decline has both positive and negative effects. Broadly, lower oil prices help contain inflation and spur consumption, the biggest part of the economy, while curbing costs for businesses. But they’re a risk for U.S. producers: the energy-industry rebound and corporate tax cuts have powered a surge in capital investment that’s been driving economic growth until recently. So it’s no wonder Trump in a tweet on Monday admonished Saudi Arabia for considering cutting its crude output to shore up prices.