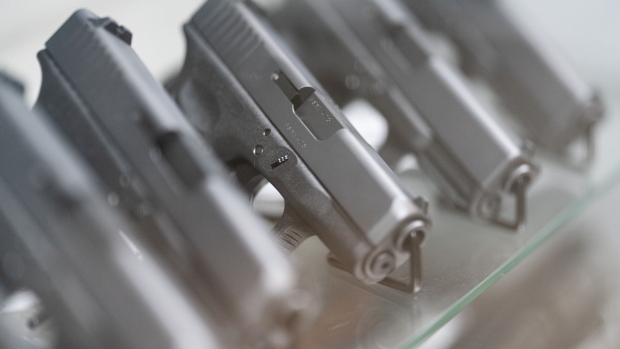 Glock Inc. semi-automatic pistols for sale at Hiram's Guns / Firearms Unknown store in El Cajon, California, U.S., on Monday, April 26, 2021. President Joe Biden's planned executive actions would crack down on "ghost guns," which can be assembled from kits and are not traceable by law enforcement because they lack serial numbers, as well as braces for pistols that make firearms more stable and accurate. Photographer: Bing Guan/Bloomberg , Bloomberg

Prompted by the Texas Uvalde school massacre and the recent mass shooting at a grocery store in Buffalo, New York, both teams posted a series of tweets containing shocking gun statistics.

Describing those events as tragedies that must not be normalized, the franchises timed their action to coincide with when fans would most likely be visiting their social media feeds.

Without explicitly advocating for gun control measures, the messages sent by the teams detailed the deleterious effects of easy access to firearms and offered contact hotlines for anyone affected by the issues discussed.

Earlier in the week, NBA head coach Steve Kerr of the Golden State Warriors declined to discuss basketball in his pre-game press conference and urged US legislators to vote for background checks to help prevent any more school shootings.

"When are we gonna do something?" the coach asked in an unsteady voice. His call was followed by the NBA on TNT broadcast, featuring Hall of Fame players Shaquille O'Neal and Charles Barkley, dedicating a segment to discuss the country's gun violence problem.