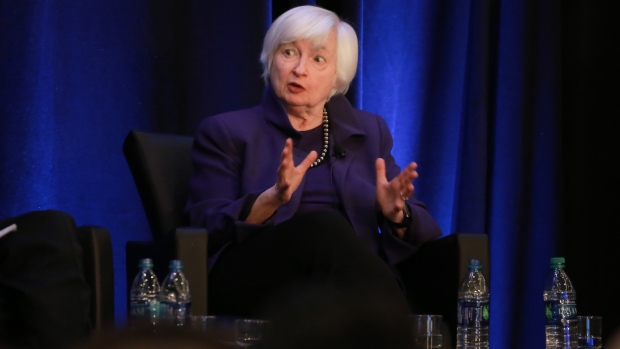 Former Federal Reserve Chair Janet Yellen said that while the U.S. economy was in a good place, threats to the outlook have increased and the central bank will continue to respond.

Speaking Thursday in Chicago, she said the Fed has begun to address downside risks and “I fully expect they will do more.”

Yellen’s former colleagues cut rates on July 31 for the first time since the financial crisis and are widely expected to move down by another quarter percentage point at their meeting in Washington next week.

“It’s entirely fair to say that we have a healthy economy,” Yellen said during a moderated question-and-answer session at the fall conference of the National Investment Center for Seniors Housing & Care. But she acknowledged that the chances of a U.S. recession had increased — repeating a warning she made last month — though it was still not what she was forecasting to occur.

The U.S. economy has slowed but remains relatively solid. Uncertainty over the country’s trade policy has dented business investment and chilled global growth. But consumers are still spending, helped by a tight labour market where the lowest unemployment level in nearly 50 years is gradually lifting wages.

Yellen said she thought the Fed was on track to lift inflation to its two-per-cent target — a goal it has mostly undershot since 2012 — though she was wary of persistently weak price pressures.

“Inflation is far below target and no one wants to become Japan,” she said. Japan has struggled with many years of too-low inflation which has resisted major policy efforts to get prices to rise at a faster pace.

Yellen, who was replaced at the Fed’s helm by President Donald Trump in favour of Jerome Powell, has been a staunch defender of the central banks independence in the face of unprecedented public attacks on the institution by the president.

These have become almost daily events. Trump tweeted about the Fed earlier on Thursday after the European Central Bank increased monetary policy stimulus. On Wednesday he called on the Fed to cut rates to “zero, or less” to allow the U.S. to refinance its debt on better terms.

Yellen said that the idea the Fed should lower rates to zero or into negative territory to finance the national debt is a notion that has “long been rejected.”

--With assistance from Kathleen Hays