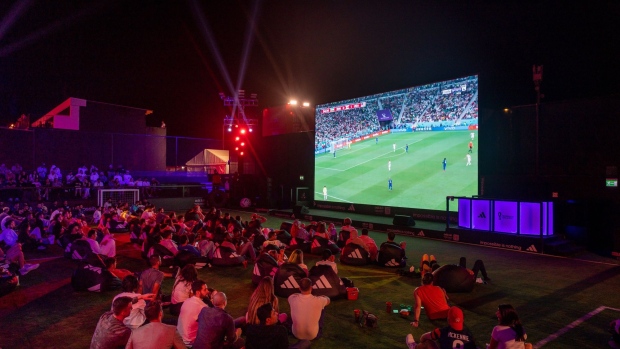 Fans watch the FIFA World Cup 2022 match between Iran and USA at the BudX FIFA Fan Festival at Dubai Harbour in Dubai, United Arab Emirates, on Wednesday, Nov. 30, 2022. Doha is expected to welcome more than 1 million fans during the FIFA World Cup 2022, but many of them will be staying in Dubai and other surrounding cities, taking shuttle flights in for the day. , Bloomberg

(Bloomberg) -- As World Cup matches play out in dramatic fashion, captivating international attention and even slowing trading volumes on Wall Street, bosses across the globe are faced with a dilemma: Whether or not to let their employees watch at work.

With a projected 5 billion viewers — more than half the world’s population — and many matches played during working hours, the 28-day event has some implications for the working world. Almost 40% of the World Cup hours overlap with work in the UK — defined as Monday to Friday from 9 a.m. to 6 p.m. local time — and almost half conflict with US business hours, according to an analysis by software company InvGate.

On Twitter, hundreds of soccer fans are sharing their glee (or frustration) at being able to watch at work (or not). The platform is overflowing with stories of wayward workers: cashiers with phones propped up to stream the action, colleagues huddled in conference rooms celebrating mutely, and a few bold souls sequestered in bathrooms to tune in with the volume all the way up.

In Switzerland, employees of the canton of Basel-Landschaft were sent a stern email forbidding them from streaming the World Cup after they crashed its Wi-Fi network during the nation’s opening match against Cameroon, temporarily disrupting government services. In Brazil and Argentina, where soccer is powerful enough to turn match days into unofficial holidays, some expats turned to social media to complain about how that translated into no-school days. “I will now be rooting for a quick elimination for the national team,” one Sao Paulo-based parent joked on Twitter.

On Reddit, one UK-based manager posed the question in a post that’s so far generated over 900 comments. The top comment, with more than 3,000 upvotes: “Happier staff = better workplace. Shame most managers haven’t figured that out.”

As many commenters noted, even if banned from watching during business hours, many employees are likely to skirt such rules by livestreaming games on their work laptops alongside their Excel spreadsheets or Zoom calls, especially if they’re working remotely, or simply calling in sick. (That last strategy could put your job in jeopardy, employment law firms warn.)

Still, productivity-monitoring platform ActivTrak said its data shows employees continue to get work done at near-equal levels to non-World Cup weeks. Data from more than 4,500 US-based workers the day of the US versus Wales matchup, which was held on a Monday afternoon at 2 p.m. New York time, showed no clear departure from business as usual based on the measures watched by ActivTrak.

But even if there’s no change in how much work gets done, there’s some evidence that there’s been a change in when it gets done.

Hive.com, another productivity-tracking system, has seen a major shift toward work getting done later in the day, even though there has been only been a nominal dip in overall activity so far during the tournament. The company has seen productivity surge between 3 p.m. and 6 p.m. New York time, as most games are wrapping up, as well as a modest boost in evening activity. Hive, whose data points include creation and completion of tasks and other status updates, did note a 30% decline in activity across its workspaces as the US team played Iran.

This week, managers got a brief reprieve: no games were scheduled for Wednesday or Thursday. The tournament picks back up with the quarterfinal matches on Friday. The semifinals will be held next Tuesday and Wednesday at 2 p.m. New York time (7 p.m. London time), and the final will be played the following Sunday — a win for managers everywhere.

Lunch break in the UK

Of those planning to watch the World Cup in the UK, almost 16% had said they planned to tune in to the Nov. 21 England versus Iran match — a Monday afternoon contest — at work with their manager’s permission, according to a YouGov survey. Meanwhile, 13% planned to take time off for the match and 9% said they intended to skive off work to watch without telling their boss. (A third of people surveyed said they weren’t scheduled to work at the time of the match, so didn’t have to contend with the conflict.)

While England versus Iran took place at 1 p.m. London time, perfect for a lunch break, last Friday’s Wales versus Iran game was held at the much less convenient 10 a.m. The Guardian advised fans intent on watching at work to practice their poker face, schedule a perfectly timed meeting, use the command-M shortcut on Mac computers to quickly hide open internet tabs, and even invest in a mini rear-view mirror so supervisors wouldn’t catch them by surprise.

Michaela Ricketts, a UK-based recruiter for HackerOne, a global cybersecurity firm, had been seeing the debate play out on LinkedIn: One side saying people shouldn’t watch during work hours and the other side arguing it’s team-building rocket fuel. Ricketts cut through the noise: “If you want to watch it, cool — make sure you book it out on your calendar. If you don’t want to watch it, that’s also cool!” HackerOne operates asynchronously, so its employees get their work done on their own time, communicating to colleagues when they’re working via their calendars. That means they’re free to watch a match in the middle of the day and simply finish tasks earlier or later in the day without worrying about keeping up the appearance of productivity.

Read more: No Longer Tied to Offices, Workers Are Still Bound by the Clock

“You’re a grown-up,” Ricketts said. “You don't have to hide that you’re watching the World Cup.”

Fun at the office in the US

While the draw of the World Cup is a particularly strong in Europe and Latin America, its popularity in the US is on the rise. Almost 60% of US soccer fans plan to watch this year, according to a Morning Consult survey conducted last month, up from the 45% who reported watching in 2018. As for the US population at large, about one quarter expect to watch “some” or “a lot” this year.

Robin Pou, an executive coach and founder of a leadership development firm based in Dallas, said he recently reached out to 30 leaders he works with to invite them to watch the World Cup, and every single one said no — they were too busy.

“I get it, it was last minute, they may not like soccer, but it just rose up in me this sort of existential question of leadership,” Pou said. “Why are we working so hard?” he said, describing clients who complain of exhaustion and burnout as they maneuver out of a pandemic crisis and into a recession.

It’s short-sighted to worry about productivity lost when taking time to build relationships and have a little fun at the office, Pou tells CEOs. He urges them to think of the two hours it takes to watch a match as an investment in relationships.

“It’s a real solution to a current-day challenge that I’m hearing from all leaders across all industries and all sizes of organizations,” he said. “It’s useful — not just cute.’’

(Updates with semifinal and final matches in 10th paragraph.)