For Keystone XL, the third time may soon prove to be the charm, even if three burning issues will continue to plague the proposed oil sands export pipeline.

After having its first two applications rejected, Calgary-based TransCanada submitted its latest application for the 1,800-kilometre artery in late January specifically at the request of U.S. President Donald Trump. The new American leader gave his State Department 60 days to review the application, which gives the department until Monday, March 27th to make a decision and Politico reported Thursday the green light will indeed come on time.

Undersecretary of State for Political Affairs Tom Shannon will announce the approval on Monday, the U.S.-based news website said, noting Secretary of State Rex Tillerson recused himself from the review process given his previous role as CEO of Exxon Mobil, which would benefit from Keystone XL approval via its Canadian subsidiary – Imperial Oil – being among the line’s expected shippers.

TransCanada spokesperson Terry Cunha confirmed to BNN the Canadian company is anticipating a decision by the March 27 midnight deadline and approval was broadly expected given the Trump administration’s support for the oil and gas industry in general and new pipelines specifically. The U.S. State Department did not respond to a request from BNN sent prior to the publication of the Politico report. 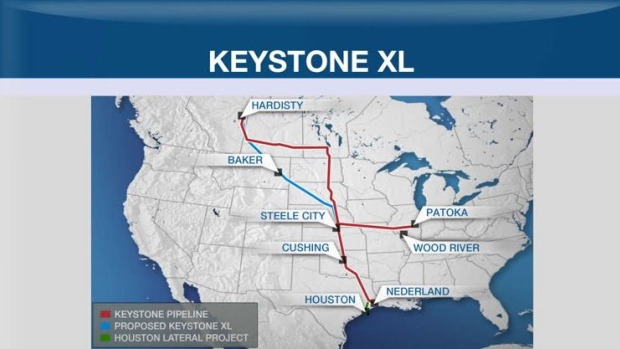 Yet with approval now seemingly imminent, several questions will nonetheless continue to surround the controversial project even if Keystone XL clears its most significant regulatory hurdle next week. Below, BNN takes a look at the three most pressing.

WHERE WILL THE STEEL COME FROM?

Part of the executive order giving the State Department 60 days to review the latest Keystone XL application included a requirement for all new pipelines in the United States to use American-made steel “to the maximum extent possible.”

TransCanada has already purchased half of the required steel from Little Rock, Arkansas-based Welspin Pipes Inc. but the other half was intended to come from Chicago-based Evraz North America’s plant in Regina, Saskatchewan (24 per cent), Italy-based Gruppo ILVA (16 per cent) and Welspun’s Indian operations (10 per cent).

Politico reported in early March that Keystone XL would be exempted from the made-in-USA steel requirement but President Trump also reportedly told U.S. Steel Corp. CEO Mario Longhi in February that TransCanada would need to buy “steel made in this country and pipelines made in this country.”

WHAT ABOUT THE NAFTA CHALLENGE?

After former U.S. President Barack Obama rejected the project’s second application in November of 2015 (the first one was rejected in January 2012),

TransCanada filed a lawsuit against the U.S. government, arguing the decision ran afoul of the North American Free Trade Agreement. The claim, filed in July 2016 in the International Center for the Settlement of Investment Disputes, sought US$15 billion in damages given the billions of dollars TransCanada had already spent on the project as it sat in regulatory limbo.

The company suspended its claim on February 27th for one month “pursuant to the parties’ agreement” but it remains unclear what circumstances would be required for TransCanada to abandon the claim entirely.

DID YOU FORGET ABOUT NEBRASKA?

The cornhusker state has over the years proven to be the foremost obstacle standing in the way of Keystone XL approval. TransCanada’s first application was rejected in large part over opposition in the state to the original route traversing an ecologically sensitive region around the Ogallala Aquifer, which serves as the primary source of drinking water for millions of people in the Great Plains region.

The route proposed in TransCanada’s second application was specifically designed to avoid the aquifer, yet Nebraska-based opposition remained so intense that the State Department was eventually forced to suspend its review when a legal dispute erupted over whether Nebraska’s then-Governor had the authority to approve the route under a controversial new state law. That question has now been settled and authority returned to the Nebraska Public Service Commission.

However, with anti-pipeline activists still seeking to intervene in the PSC review process, approval from the Republican-controlled body is by no means assured. Even if it was, the PSC generally takes an average of seven months to approve or deny an application and it also has the authority to postpone the decision by up to a year; meaning the Keystone XL application saga – being told since 2008 – could easily extend to a decade before it is truly done.