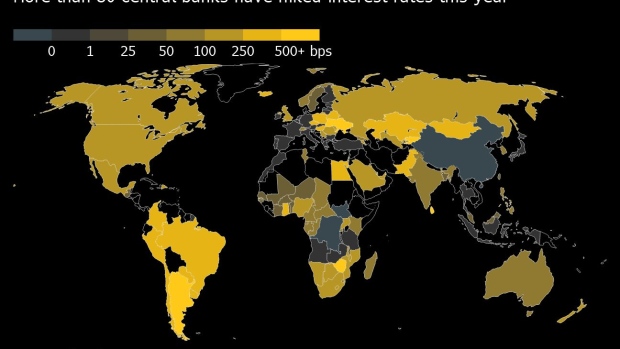 (Bloomberg) -- The central bank chiefs of the US and the euro zone shared their doubts that the low-inflation environment before the coronavirus will ever return, a shift leaving them searching for answers as interest rates rise.

“Since the pandemic, we’ve been living in a world where the economy has been driven by very different forces,” Federal Reserve Chair Jerome Powell said on a panel moderated by Bloomberg Television’s Francine Lacqua.

Alongside him, European Central Bank President Christine Lagarde concurred that she doesn’t think “that we are going to go back to that environment of low inflation.”

Speaking on Wednesday at her institution’s annual forum in Sintra, Portugal, Powell explained how forces including globalization, aging demographics, low productivity, and technological developments are no longer keeping prices in check. The Fed’s alarm at inflation recently prompted officials to raise rates by the most since 1994.

“What we don’t know is whether we’ll be going back to something that looks more like or a little bit like what we had before -- we suspect it’ll be kind of a blend.” Powell said. “We’re learning to deal with it.”

Central bank officials from across the globe are gathered at the ECB’s first such hillside retreat since before the pandemic against a backdrop of surging consumer prices, threats to economic growth and the possibility of further energy disruptions. Lagarde observed, with a hint of nostalgia, that things just won’t be the same.

“There are forces that have been unleashed as a result of the pandemic as a result of this massive geopolitical shock we are facing now that are going to change the picture and the landscape within which which we operate,” she said.

Also present, Bank of England Governor Andrew Bailey, whose own economy is also contending with its exit from the European Union, observed that the sheer succession of impacts buffeting the UK is in itself a challenge.

“It’s how you deal with a series of large supply shocks with no air gap between them, which of course feeds through into expectations,” he said. “Put them all together, they’re not transitory in the traditional sense of the term.”

Lagarde echoed Powell to provide a similar list of the downward forces containing inflation in the past 20 years, including “just-on-time” manufacturing. She reckoned the shifting era will herald yet more upheaval.

“That has changed, and will probably change continuously towards a system that we are not certain about,” Lagarde said.

Powell offered a warning that while he considers it possible to hike rates without triggering a recession, it “will be quite challenging.” The ECB -- which is on track to raise twice in the next quarter -- must be ready to step up action if needed, while moving gradually to account for high uncertainty, Lagarde said.

The US central bank chief cautioned that it may be too early to judge if high inflation is a more permanent feature of the global economy, observing that economists’ models had failed to anticipate a huge supply shock.

“That process could work in reverse,” he said. “Inflation could come down more quickly.”

In the meantime, the central bankers must adjust to the new reality.