Google's performance came a long way over the decade

Alphabet Inc. shares rose 1.2 per cent in pre-market trading on Thursday, following a flurry of positive analyst commentary on the Google parent’s 2020 prospects.

At least three firms raised their price target on the stock, while KeyBanc Capital Markets named it one of its “key ideas” in the Internet sector this year. In particular, analysts were broadly positive that Alphabet would see strong growth in its ad business, helped in part by political ad spending.

Alphabet’s extending a recent record push, having gained more than 35 per cent from a low in June, a rally that has taken it within striking distance of a US$- trillion valuation. On Wednesday, it closed with a market capitalization of about US$969 billion. 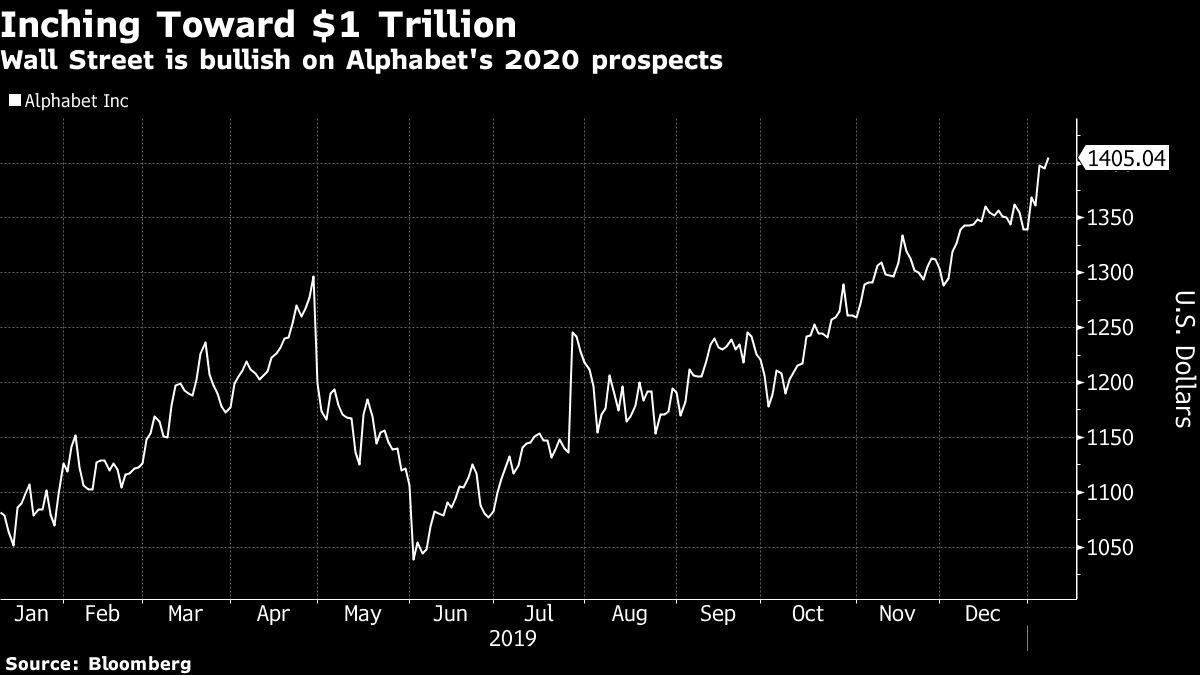 There are several advertising and shopping initiatives “that could increase product monetization and impact overall revenue growth,” wrote BofA analyst Justin Post, who called Alphabet “a top Internet utility.” He reiterated his buy rating on the stock and lifted his target to US$1,620 from US$1,450.

Jefferies raised its target by US$100 to US$1,650, making it one of the most optimistic forecasts on Wall Street, behind Credit Suisse’s Street-high view of US$1,700. Analyst Brent Thill reiterated his buy rating, seeing “continued search strength, aided by increasing contribution from mobile, YouTube and international expansion.”

KeyBanc sees Alphabet benefiting from key 2020 trends, including a heightened investor focus on profitability, an “intensifying battle for entertainment space/time” and political ad spending in an election year. The “historic scale” of digital political ads this year “should benefit large ad platforms, both through the direct spend and in the competition for ad space, which should raise prices for other advertisers.” Analyst Andy Hargreaves has an overweight rating and US$1,546 price target on Alphabet shares.

Google Search is the highest return on investment platform, and YouTube is expected to be one of the “bigger expected ad budget share gainers” through 2021, wrote analyst John Blackledge. He reiterated his outperform rating and raised his price target to US$1,575 from US$1,525.

Currently, 40 analysts recommend buying Alphabet, while five have a hold rating on the stock. None of the firms tracked by Bloomberg have a sell rating on the shares. The average price target is about US$1,467, roughly four per cent above the most recent close.