Cboe Global Markets Inc. brought U.S. stock-market volatility trading to the masses 16 years ago with futures on the VIX index. Replicating that success with interest rates has been elusive, but the firm is going back to the drawing board to try again.

Trading of futures on Cboe’s 10-Year U.S. Treasury Note Volatility Index languished even as volatility soared in March and volume surged in Treasury futures and options listed at CME Group Inc. Cboe blames an unconventional design it was in the process of fixing. Then, last month, CME declined to renew the pricing data that the index was based on.

So now Cboe is trying a different approach. It plans to roll out a set of volatility indexes based on a Treasury exchange-traded fund during the third quarter and to expand its lineup of indexes based on interest-rate swaps. In each case, the goal is eventually to list futures and options on the indexes that will open up volatility trading to more investors, said Michael Mollet, director of product development at Cboe.

“There’s room for democratization of volatility trading in rates as there was in equities,” Mollet said. Rates volatility trading is big business for banks, he said, but “there may be lots of other people with risk tied to volatility of interest rates that have expertise but not access, or have opinions and just don’t have the right tools to express opinions or hedge risk.”

Cboe’s first new entry will be a suite of four volatility indexes with different tenors and based on the iShares 20+ Year Treasury Bond ETF. Known by its ticker symbol TLT, it’s among the biggest U.S. Treasury ETFs, with assets of about US$18.3 billion. On the swaps side, where options are traded over-the-counter, the process will take longer. However, it will build on the Cboe Interest Rate Volatility Index -- based on one-year options on 10-year interest-rate swaps — which has been published since 2012.

When Cboe began publishing the 10-year Treasury volatility index in May 2013 in cooperation with CME, it was muscling in on territory controlled by Bank of America Corp. via the Merrill Lynch Option Volatility Estimate Index. Created during the 1990s at Merrill Lynch by Harley Bassman, the firm’s then-head of OTC bond options, the gauge known is known as the MOVE index. It derives the implied volatility of Treasury yields from prices of one-month OTC options on two-, five-, 10- and 30-year Treasuries. 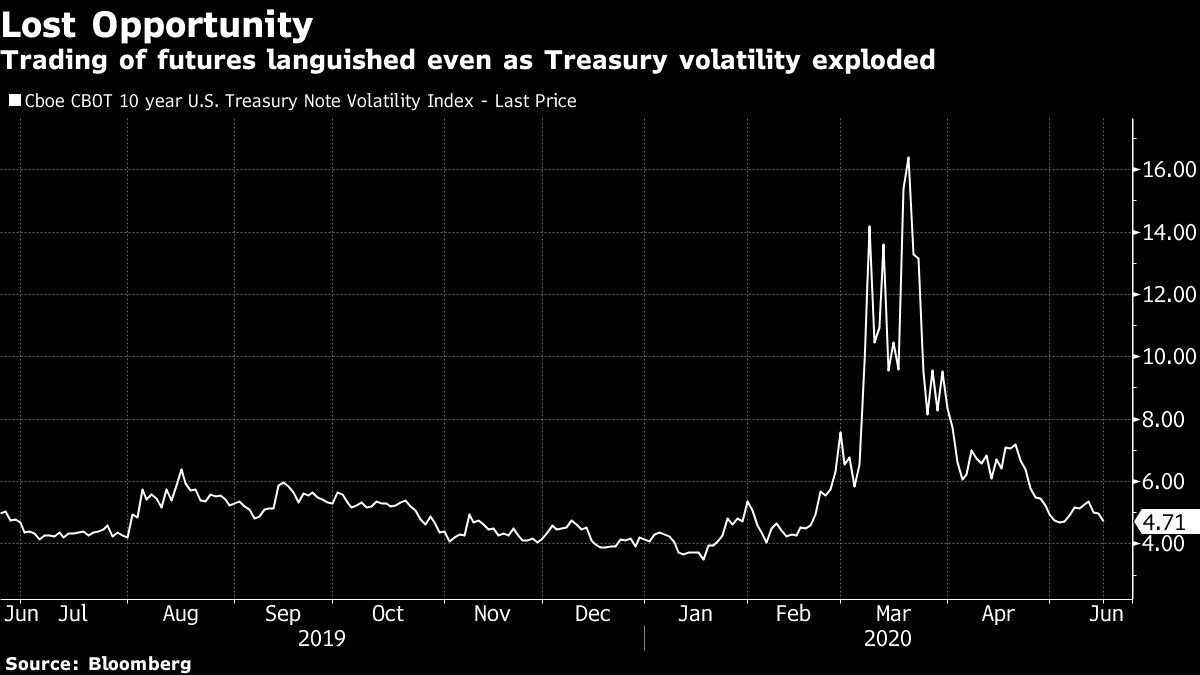 Bassman has described MOVE as “similar in form to the VIX Index,” Cboe’s S&P 500 volatility index that was created in 1993.

But the MOVE isn’t like the VIX in the sense that the VIX is based on transaction prices for listed, not OTC, options. Introducing the 10-year Treasury volatility index, based on listed options on CME’s Treasury 10-year note futures contract, Cboe and CME called it “the first volatility index of its kind.”

Cboe listed futures on the index in 2014. Unlike futures and options on the VIX, a juggernaut for the company, Treasury vol futures never quite caught on, with open interest and daily volume in the low double digits. VIX futures volume averaged 247,000 contracts a day during the first five months of this year and VIX options volume was 614,000 contracts a day, about six per cent of average daily volume in options across Cboe’s four exchanges.

To be sure, the volatility franchise has also been an occasional source of trouble. Credit Suisse Group AG this week delisted a group of exchange-traded notes including a US$1.5-billion product that aimed to deliver twice the daily return of the S&P 500 VIX Short-Term Futures Index, leading Goldman Sachs to downgrade Cboe shares.

When it comes to the Treasury VIX, Mollet attributes its failure to a structural flaw that Cboe was in the process of fixing. The Treasury VIX expressed volatility in price terms, whereas the convention in Treasury options is to express it in basis points. Mollet said a conversion methodology had been worked out when Cboe learned that CME intended not to renew the options-data license when it expired.

CME declined to comment on the data license. Agha Mirza, its global head of interest-rate products, said in a statement that CME’s listed options are “the best way to monitor, trade or hedge volatility” on its 10-year Treasury futures contract. Volume in the options has grown 70 per cent over the past five years, he said.

Cboe is betting there’s room for more growth outside the “relatively small subset” of investors with access to CME’s products and over-the-counter interest-rate derivatives. That was its experience when it listed futures and options on the VIX, Mollet said.

By calculating a volatility index for the TLT, Cboe will sidestep the data licensing pitfall. Also, the ETF compares favorably as an underlying asset to the more complicated Treasury futures contract, which tracks a basket of deliverable bonds and has quarterly expirations. And there is plentiful liquidity in the options. The fund is the third most-traded fixed-income ETF, and has the second-highest open interest in its options.

Creating volatility indexes for swaps is a harder lift because options pricing data is relatively sparse, Mollet said. But there is more potential for an array of products based on various tenor-maturity combinations, as well as other currencies.

Bassman, who retired from financial services in 2017 but continues to publish commentary on his website ConvexityMaven.com, is skeptical about the growth potential of rates volatility index trading, relative to VIX futures and options.

Indicators like the MOVE index “are important for risk analysis and management, but trading these products can be more challenging since their short-term correlation to rate level can be fluid,” he said. The VIX has a strong negative correlation to the S&P 500, whereas the MOVE can spike when rates move sharply in either direction.

Also, as the MOVE index shows — and the Treasury VIX did until it was discontinued — U.S. rates volatility collapsed after the Federal Reserve cut the U.S. policy rate to near zero in March and vowed to keep it there for as long as it takes the economy to recover from the pandemic.

The level of volatility might influence the timing of any decision to list futures and options on the new indexes, Mollet said. In the meantime, however, “We’re giving people transparency and insight into how Treasury volatility behaves,” and expect demand for the new index “regardless of what market sentiment is at this point.”