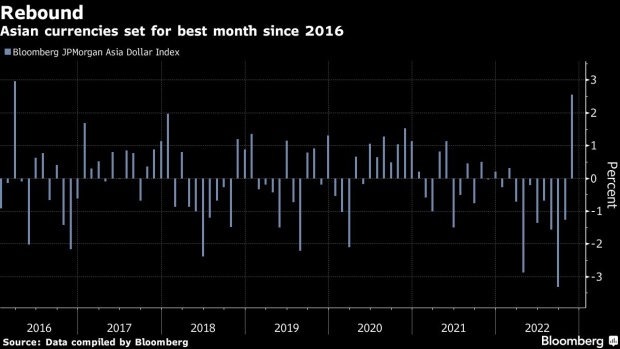 A pedestrian walks past a currency exchange store in Mumbai, India, on Thursday, June 28, 2018. The rupee, the worst performing currency in Asia this year, touched a record low at 69.0925 per dollar on Thursday as gains in oil prices threatened to stoke inflation and worsen the nations domestic and external finances. Photographer: Dhiraj Singh/Bloomberg , Bloomberg

(Bloomberg) -- Asian currencies are set for their steepest monthly advance in more than six years, with the approaching end of the Federal Reserve’s tightening cycle supporting gains.

The Bloomberg JPMorgan Asia Dollar Index has rallied 2.7% in November to head for its biggest monthly increase since March 2016. South Korea’s won is the best performer after logging a 7% rise, followed by the Thai baht which climbed 6.8%.

“While the Fed has clearly communicated further hikes, the bulk of dollar gains is now over,” said Eugenia Victorino, head of Asia strategy at Skandinaviska Enskilda Banken AB in Singapore. “Asian FX will have a chance to pare back some of their losses after a dismal year.”

To be sure, Asian currencies still have to contend with the risk posed by China’s virus outbreak, after rising anger against stringent curbs fueled demonstrations over the weekend. Traders are awaiting Beijing’s next move, with analysts divided on whether the unrest will spur more lockdowns or hasten the nation’s exit from Covid Zero.