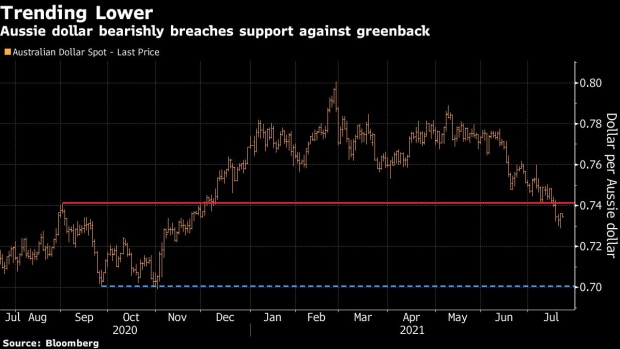 People gather at Bondi Beach in Sydney, Australia, on Sunday, July 4, 2021. Sydney residents are being urged to comply with lockdown rules for another week amid encouraging signs Australia’s largest city is getting on top of its delta-variant coronavirus outbreak. Photographer: Brendon Thorne/Bloomberg , Bloomberg

(Bloomberg) -- Hedge funds with bullish bets on the Australian dollar are counting on strong inflation data this week to help arrest a slide in the currency that’s taken it to an eight-month low.

Figures on Wednesday are expected to provide cues on the health of the economy after half of Australia’s population went back into lockdown to contain the delta coronavirus outbreak, fueling concern that growth may contract in the current quarter.

Pessimism over the economy and the Reserve Bank of Australia’s willingness to leave rates unchanged have already taken a toll on the Aussie, dragging it to 0.729 last week, lowest since November. Hedge funds are on the hook, with net long positions of 23,578 contracts on the currency as of the week ended July 20, according to Commodity Futures Trading Commission data.

Technical indicators show that more losses may be in store for the Aussie. The currency bearishly breached support around 0.74 per dollar, opening up the door for a decline toward the 0.72 level or even lower.

“We forecast AUD/USD will be trading near 0.74 by the end of September, but given the emerging risks and AUD/USD’s normal trading ranges, the Australian dollar could temporarily dip below 0.70,” said Kim Mundy, currency strategist and international economist at Commonwealth Bank of Australia in Sydney.

The currency could receive a boost if inflation picks up pace, prompting investors to bring forward RBA rate hike bets as the economy had been expanding strongly before the outbreak. Data on Wednesday is expected to show consumer price inflation rising 3.7% year-on-year in the second quarter from 1.1% before, according to a Bloomberg survey of economists.

Still, it’s unlikely to be a straight road ahead for the Aussie if New the Zealand dollar’s recent moves are anything to go by. The kiwi fell to an eight-month low last week despite the nation’s higher-than-expected second-quarter inflation reading as jitters over global growth prospects continues to dominate global risk sentiment.