Money and Marketing: How legal cannabis will be packaged and advertised

While alcohol bottles and cigarettes packs have been iconic for decades, marijuana has lived its years in dirty baggies, scrunched up tinfoil and other furtive homemade packaging solutions. That is all about to change in a few weeks when the drug is legalized across the country.

Suddenly consumers will be buying pot in “pre-rolls,” “flights” and packaging that looks like it is meant for hand cream or loose-leaf tea. For the first time, BNN Bloomberg shows Canadians what they will actually be getting from cannabis stores and websites on Oct. 17 and beyond. 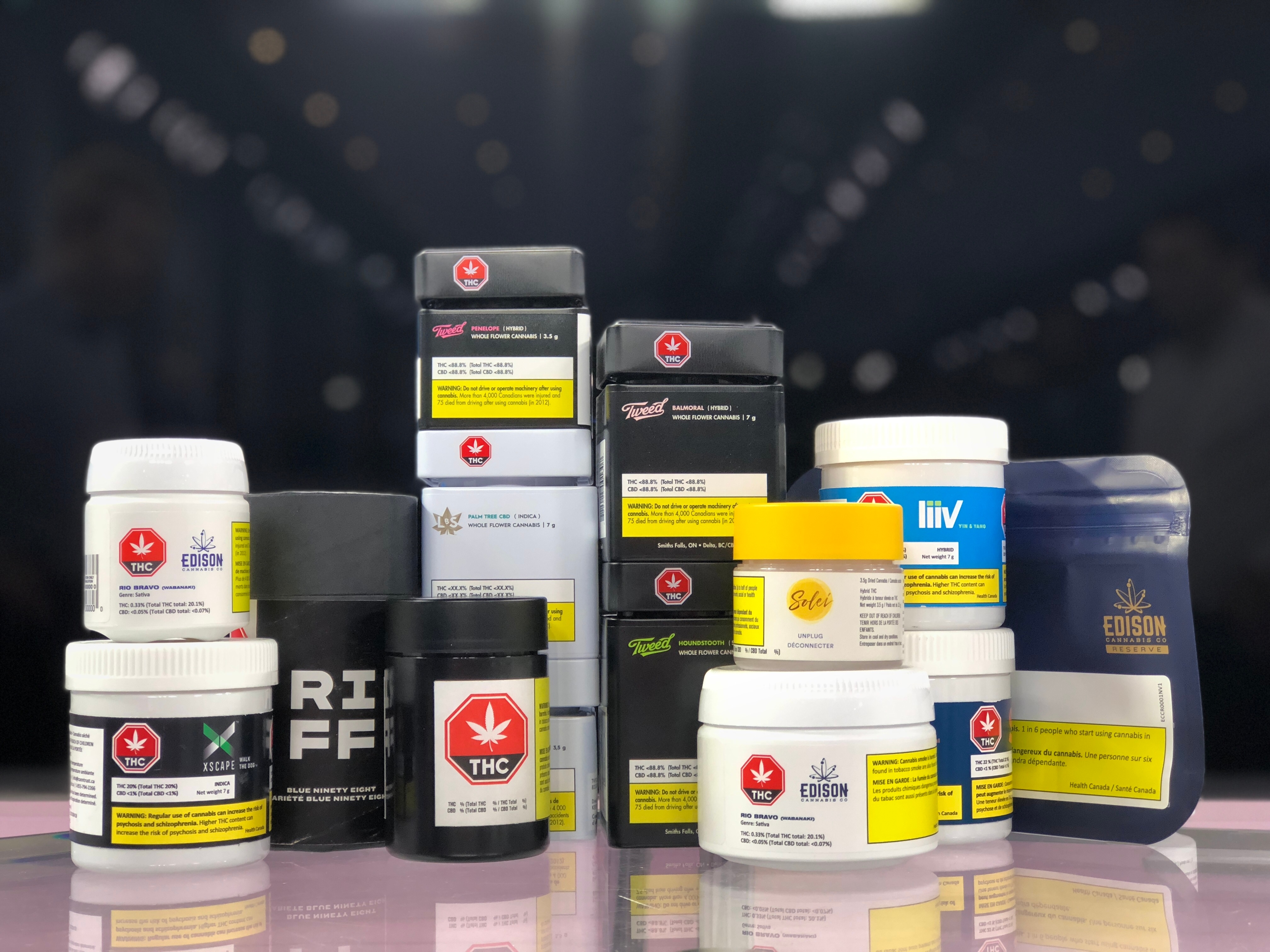 Who is it for: Users who enjoy the flexibility of smoking marijuana through a variety of methods.

What you need to know: This is likely to be the most common – and recognizable – form of pot that consumers will be able to purchase this October. While consumers were once able to buy cannabis flower in plastic baggies without any real identification on the black market, legalization is set to change that completely. Consumers will be able to purchase their cannabis in one gram, 3.5 gram, seven gram and 14 gram increments in child-resistant, professional canisters similar to some loose leaf tea containers. The packages display each producer’s brand, marijuana strain information and Health Canada warning labels. Unlike marijuana products that U.S. consumers can buy, Canadian cannabis packaging is considerably more muted given the restrictions aimed at keeping the drug out of youth’s hands. 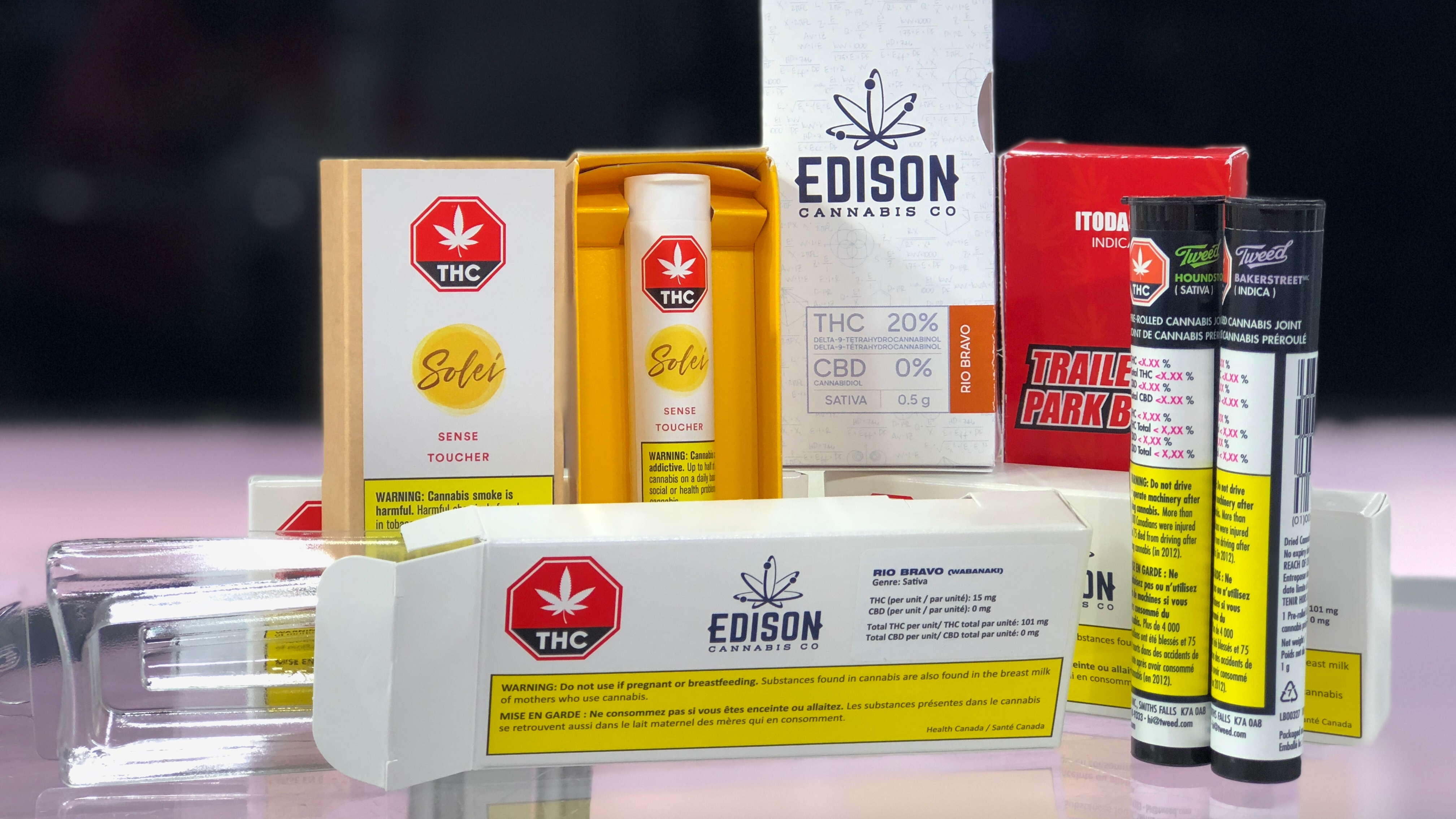 What’s inside: A pre-rolled joint with 0.5 gram to one gram of marijuana.

Who is it for: Consumers who prefer a convenient way of smoking marijuana and/or may not be able to roll their own joints.

What you need to know: These “doob tubes” are likely to be a popular product with consumers once cannabis is legal this October. Pre-rolled marijuana cigarettes are mass produced by producers with a machine that uses gravity and some automation to manufacture the joint, which will be packaged in its own individual plastic container or a small cardboard container. These pre-rolled joints are meant to take the hassle out of rolling your own, which largely benefit consumers and medical marijuana patients who don’t have the dexterity to roll their own joint or prefer the convenience of smoking without the mess. 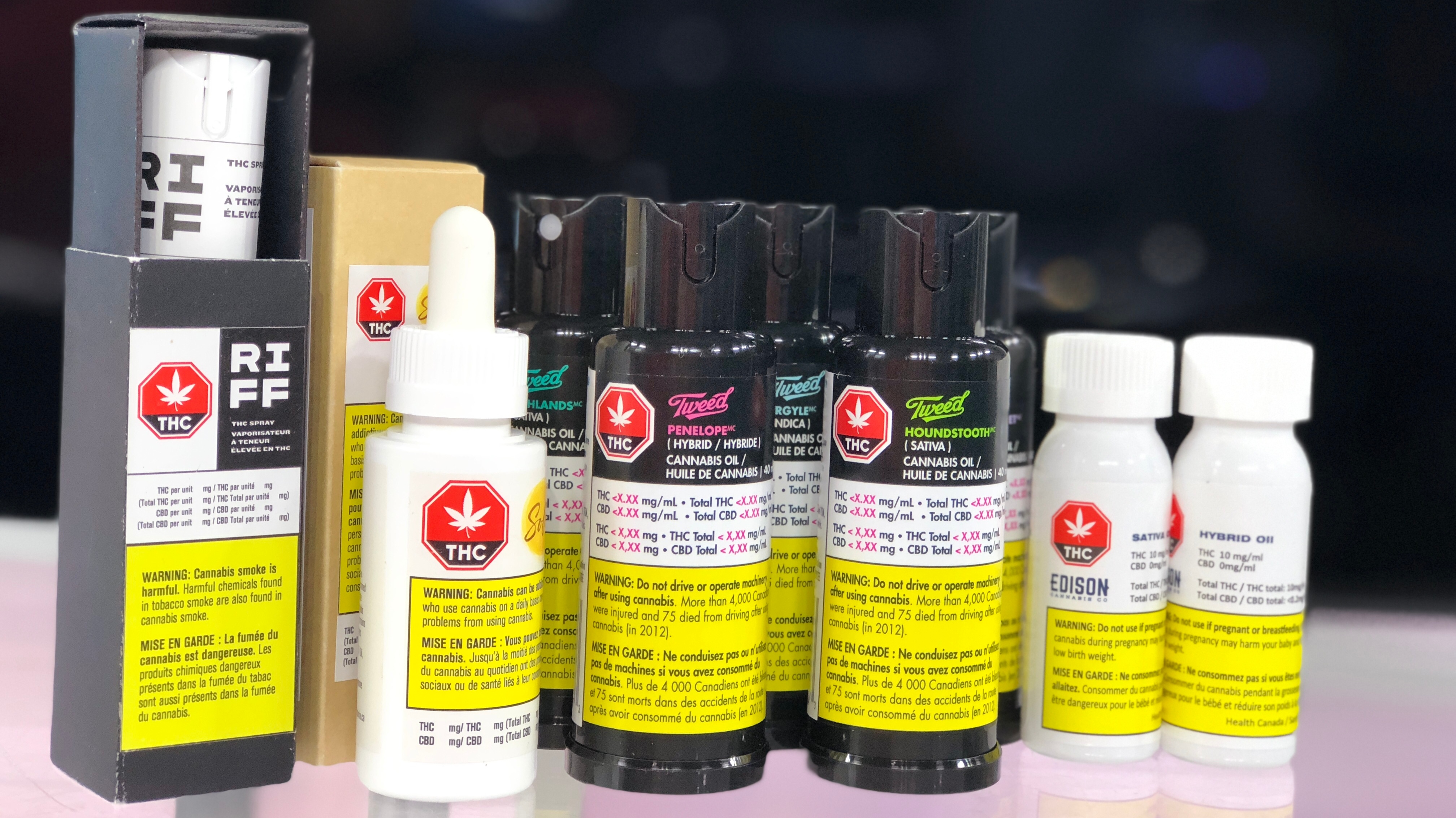 Who is it for: Medical marijuana users and consumers who do not enjoy smoking marijuana but still want the same effect.

What you need to know: Cannabis oils are mainly used to ingest refined marijuana orally or are infused into a topical cream, edible food such as a cookie or brownies, or in a drink. These spray bottles will come with a system that will always dispense an equal amount of oil per pump or will come with a dropper. The oils contain cannabidiol, tetrahydrocannabinol – which is the chemical responsible for the psychoactive feeling associated with smoking cannabis – as well as other cannabinoids, terpenes and carrier oils like olive or grapeseed oil. 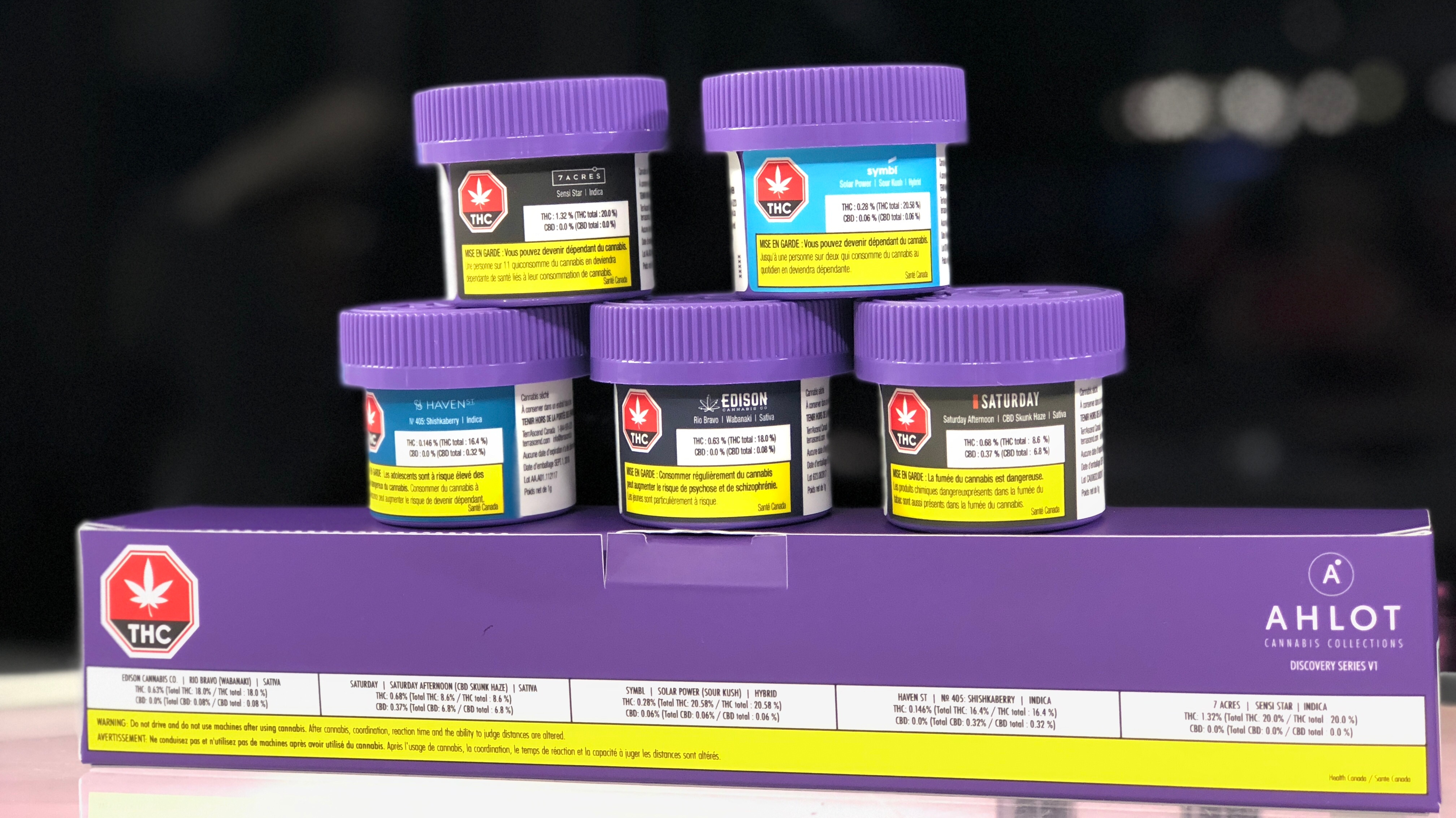 What’s inside: Small, one-gram containers of cannabis flower sources from a variety of licensed producers.

Who is it for: The consumer who doesn’t know much about cannabis and would like to sample various strains and brands.

What you need to know: With dozens of producers able to sell legal recreational cannabis this October, there’s a good chance consumers are going to be overwhelmed with choice. One Toronto-based company plans to sell its own version of a “flight” inspired by the group of small sample-sized beers that some microbreweries offer customers. AHLOT will offer various versions of their “Discovery Box” that will include five, one-gram samples from a mix of different cannabis producers that will offer a range of different marijuana strains and strengths. The initial version of the Discovery Box will be available in Ontario this October with plans to expand nationally. AHLOT also plans to release a box with five pre-rolled joints later this year. 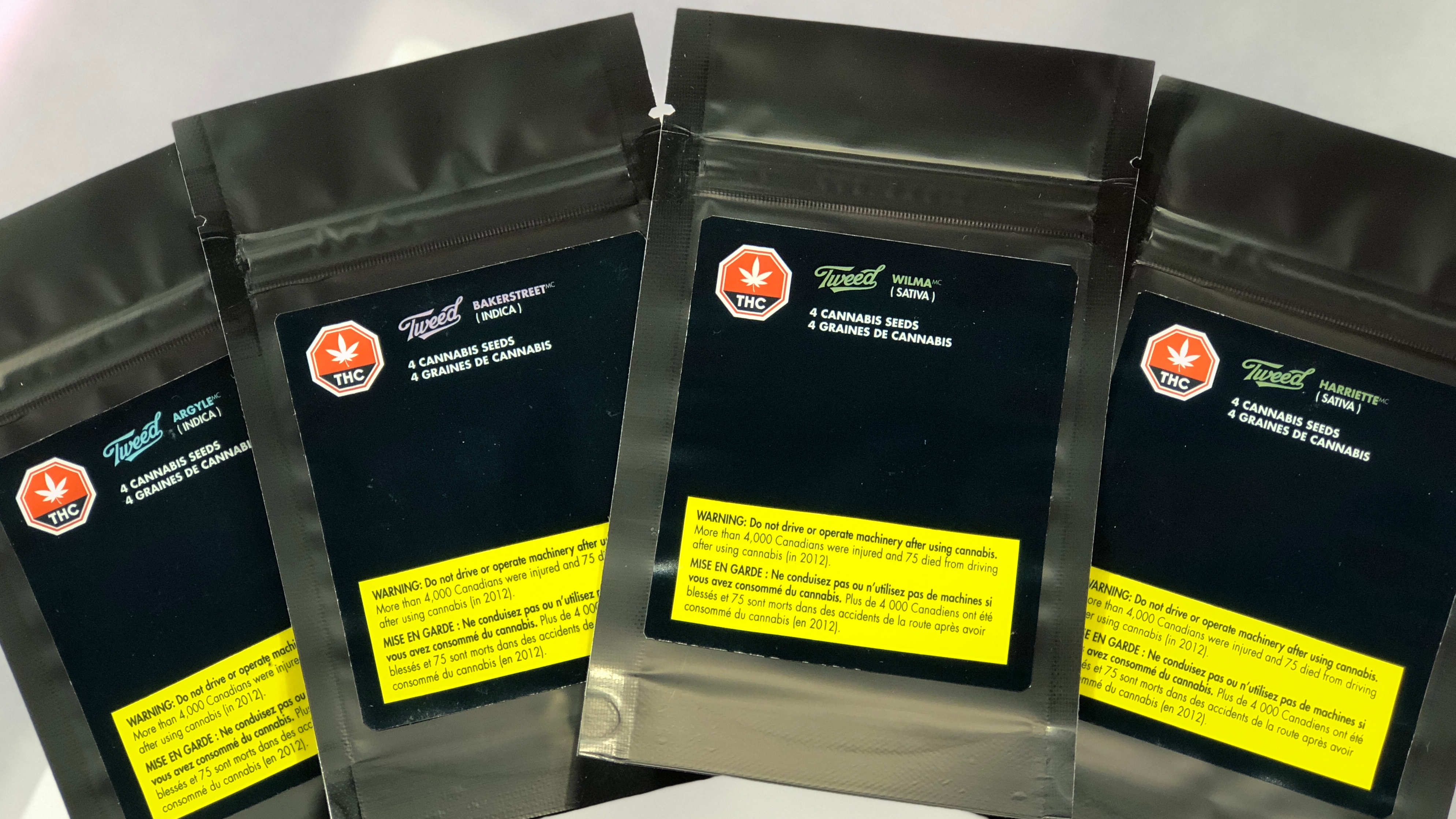 Who is it for: People looking to grow their own cannabis for recreational or medicinal purposes; people who want the health and psychoactive benefits of cannabis but prefer to ingest in pill form.

What you need to know: Aside from flower and pre-rolled joints, there will also be a few more marijuana forms that consumers will be able to legally purchase this October. Marijuana seed packs will be available for purchase for green thumbs and people who want a more intimate relationship with their cannabis plant. Meanwhile, cannabis gel caps will also be available from most major producers. Gel caps are essentially cannabis oil in pill form, similar in shape and colour to an Omega-3 vitamin.