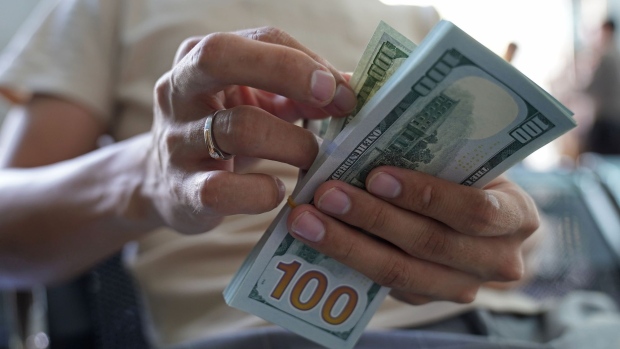 A man counts U.S. dollar banknotes at a currency exchange office in Jakarta, Indonesia, on Wednesday, March 2, 2022. The dollar is rising against virtually every peer as fallout from the sanctions levied against Russia supercharge demand for the world’s reserve currency. Photographer: Dimas Ardian/Bloomberg , Bloomberg

(Bloomberg) -- Baring Private Equity Asia Ltd., the pan-Asian buyout firm that’s merging with EQT AB, has made a takeover approach to US information-technology services provider DXC Technology Co., according to people familiar with the matter.

Talks between BPEA and DXC are ongoing, though they may not lead to an agreement, the people said, asking to not be identified because the matter isn’t public. DXC has been working with advisers after receiving interest, Bloomberg News reported last month, without identifying the suitor.

Takeover speculation has been rife around the Ashburn, Virginia-based company, which rose 9% to $28.45 at 1:43 p.m. in New York trading Tuesday, giving it a market value of about $6.5 billion.

DXC confirmed that “management has been approached by a financial sponsor regarding a potential acquisition of the company,” according to a statement.

“Management remains focused on the company’s transformation journey,” the company said. “Consistent with its fiduciary responsibility to maximize shareholder value, the company is engaged in preliminary discussions and is sharing information.”

A representative for BPEA couldn’t immediately be reached for comment.

Technology dealmaking has held steady this year amid the broader slump in mergers and acquisitions. Part of that has been driven by private equity firms, which like the sector and are taking advantage of a market dip to go shopping. Vista Equity Partners offered to buy software-security firm KnowBe4 Inc. in September.

DXC, which provides analytics and business-process services to insurance and aerospace companies, has been a takeover target before. French technology services provider Atos SE approached it about a combination last year before walking away after DXC described its offer as inadequate.

BPEA, founded by Jean Eric Salata, is seeking to expand its cross-border dealmaking capability after Sweden’s EQT agreed to acquire the firm for about $7.5 billion earlier this year. The Asian firm gathered $11.2 billion for its biggest pool of capital in the firm’s history, it said last month.

(Updates with statement in fourth paragraph.)