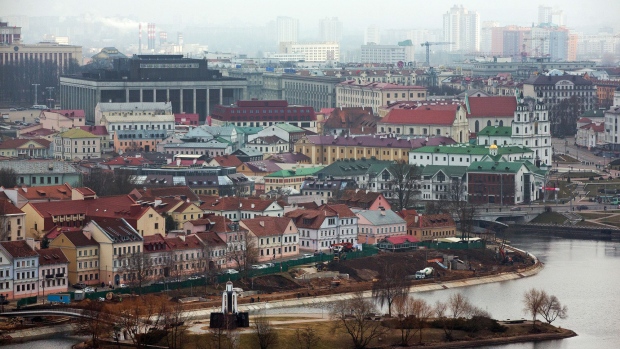 Old buildings stand beside a waterway in the Upper Town historic district of Minsk, Belarus, on Wednesday, March 15, 2017. Belarusian President Alexander Lukashenko put off the imposition of a new fee that had sparked the biggest anti-government protests in five years in this authoritarian country, giving his embattled opponents a rare win. Photographer: Andrey Rudakov/Bloomberg , Bloomberg

(Bloomberg) -- Belarus’s credit grade was cut four levels to Ca by Moody’s Investors Service, which said the country’s exposure to the Russian invasion of Ukraine makes a default “increasingly likely.”

Moody’s assigned the Eastern European nation its second-lowest credit grade amid the likelihood of “significant further tightening of sanctions targeting key economic sectors and the financial system,” according to a statement released Thursday.

“That will hamper the country’s already narrow external buffers and jeopardize its capacity to service its debt,” Moody’s said.

The rating company maintained its negative outlook for the country and said it’s unlikely that any financial support from Russia would be used to meet debt obligations.