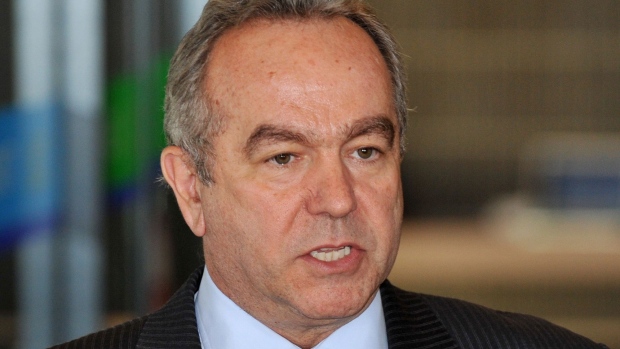 US Assistant Secretary of State for East Asian and Pacific Affairs Kurt Campbell speaks to the media after meeting with Japanese officials at the Foreign Ministry on January 17, 2013. , Photographer: Kazuhiro Nogi/AFP/Getty Images

(Bloomberg) -- America’s Indo-Pacific security partnership with the U.K. and Australia is more of a stand against China’s actions than a technology sharing arrangement, Biden’s Asia Czar Kurt Campbell said on Wednesday.

China’s provocative actions towards its neighbors and the “economic warfare” it’s conducting against Australia has drawn the allies closer when just seven or eight years ago it was expected they’d drift apart, said Campbell, the U.S. coordinator for Indo-Pacific affairs on the National Security Council.

The Aukus partnership “is both a clear anxiety about what we’ve seen in terms of certain actions and policies on the part of China, but it is also a determination that no, we have a role in our future and we’re going to stand up,” he said at an event hosted by the Lowy Institute, a Sydney-based international policy think tank. “So in that respect I’m extraordinarily proud of this achievement and I think it will be a defining effort for all the countries involved.”

Aukus, which will help Australia acquire nuclear-powered submarines, increases cooperation on defense measures between the key allies in areas including cyber and artificial intelligence just as China expands its military presence in the Indo-Pacific. The deal has since prompted China to angrily warn of an arms race in a region riven by maritime territorial disputes.

Campbell expects the China-Australia relationship to improve over time after Beijing tried “to drive Australia to it’s knees and then find a way forward.” Australia has demonstrated resilience to the pressure, something China “deep down respects” and “it will, I believe, re-engage on Australian terms,” he said.

Campbell also said the U.S. is in “early stages of competition with China” and it’s important to be steady and resolute in how America and its allies approach “strategic circumstances.”

“There will probably be some bumps along the way” with respect to China, he said. “The most important thing is the steadiness and not to be deterred from our overall course either by incidents or inducements. That’s going to be most important mission in the time ahead.”

One of the most important U.S. initiatives for next year would be to upgrade all of its engagement with the Association of Southeast Asian Nations, Campbell said, as the Biden administration plays catch up with China in building influence in the region.

“I do believe that means high level leader-to-leader engagement, it will be in the economic realm, political strategic, educational,” he said. “So we recognize the critical importance of Asean centrality and we want to build on previous examples of high level diplomacy and basically articulate a vision of a close partnership between the United States and Asean moving forward.”

(Updates with comments on Southeast Asia from paragraph 8)