The Western world’s biggest oil companies likely just generated more cash than at any time since the Great Recession, and investors are about to find out what they’ll do with it.

The five supermajors -- starting with Royal Dutch Shell Plc and TotalEnergies SE, who release earnings on Thursday -- will report about US$29 billion in free cash flow combined in the third quarter, according to analysts’ estimates compiled by Bloomberg. That would be the most since the beginning of 2008. Strong demand for crude, surging prices for natural gas and chemicals, and a rebound in the refining business are likely to be the main drivers.

An upbeat set of results would help cement a remarkable turnaround after a painful 2020, in which Big Oil was forced to cut costs and employees, shelve spending plans and take on debt. Shell and BP Plc even resorted to cutting their vaunted dividends. Shareholders are now anxious to see whether the companies will return their windfalls via higher dividends or stock buybacks -- or use them to produce more oil and gas.

“We’re seeing really strong results on the free cash flow side,” said Noah Barrett, a Denver-based analyst at Janus Henderson Investors, which has US$428 billion under management. “But on the earnings calls we need to hammer on whether it’s sustainable, or whether the majors are starving the core business of capital.”

Exxon Mobil Corp. and Chevron Corp. report on Friday, with BP bookending the results on Nov. 2. 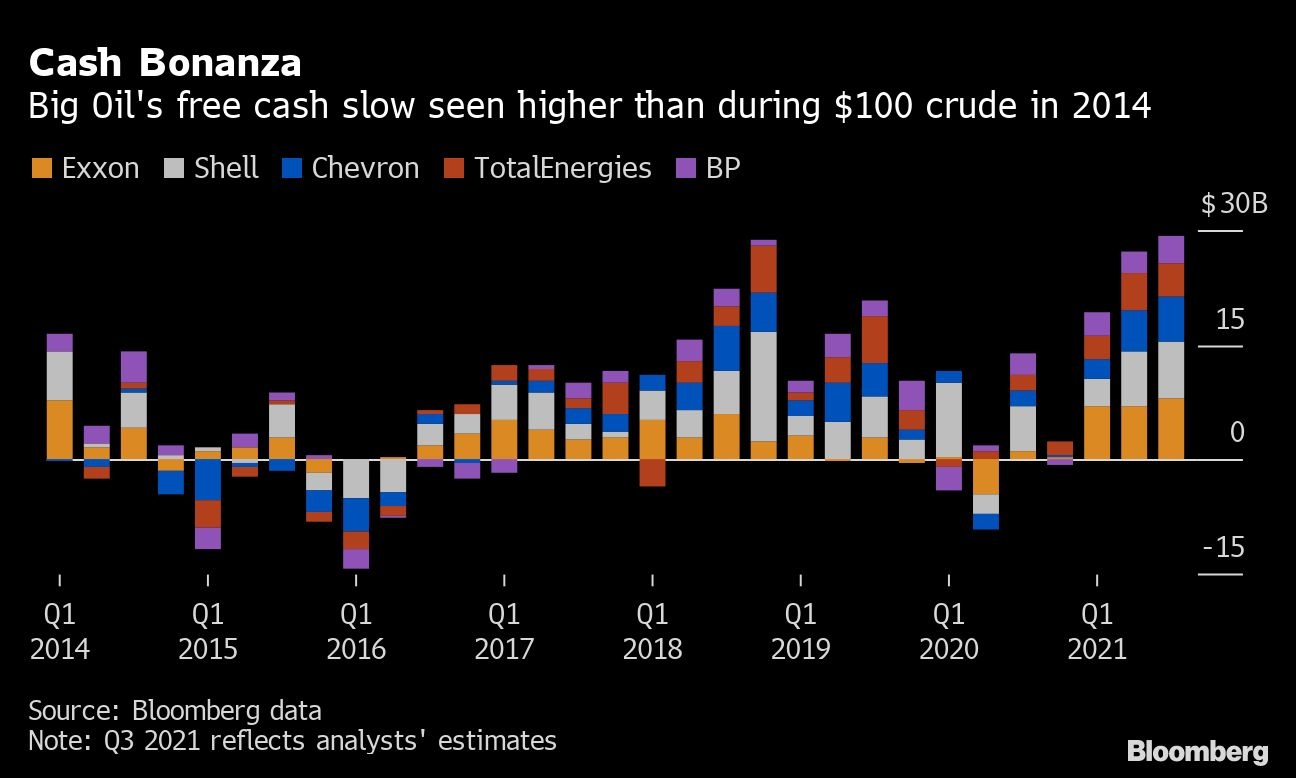 Executives at publicly traded oil companies have so far this year been keen to reinforce their commitment to spending discipline, even in the face of soaring commodity prices that would have prompted a raft of fresh spending on new megaprojects in previous boom cycles. Instead they’re focused on paying down debt and returning cash to shareholders following a decade of weak financial performance even before the pandemic, plus emerging risks posed by the energy transition.

As such, Exxon investors will be focused on the “path forward for incremental shareholder returns” this quarter, Goldman Sachs analysts wrote in a note. Chevron also has the potential to increase its share buyback, according to Morgan Stanley. BP could announce US$600 million worth of incremental buybacks in the third quarter, while Shell might hold off on further repayments until the final quarter of the year, Jefferies analyst Giacomo Romeo wrote in a research note. France’s TotalEnergies has already promised to buy back US$1.5 billion of shares in the fourth quarter.

Still, buybacks and dividends aren’t the only option for all that cash. With Europe and Asia short of gas, and the U.S. and India calling for OPEC+ to produce more oil, the profit incentive to drill for more fossil fuels is increasing as the majors plan their 2022 capital budgets. Executives should be cautious in overcommitting to shareholder returns because the good times might not last, according to HSBC.

“As strong as the near-term financial outlook is for the sector, we aren’t convinced the oil and gas prices driving the latest rally are sustainable,” London-based analyst Gordon Gray said in a note, citing continued valuation headwinds over energy transition risks.

What to Watch For: