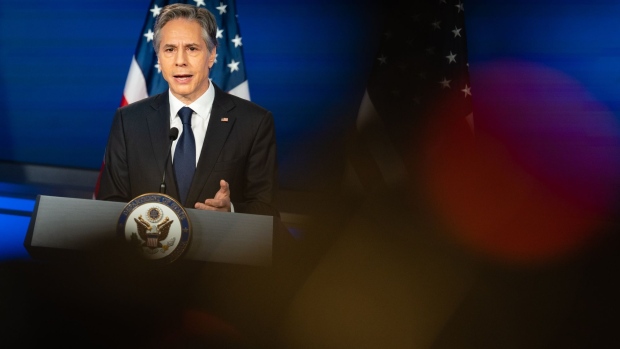 Antony Blinken, US secretary of state, speaks while outlining US strategy toward China at George Washington University in Washington, D.C. US, on Thursday, May 26, 2022. Blinken used his remarks to explain existing policies rather than unveil any bold new direction that includes a strategy of investing in democracy and innovation at home. , Bloomberg

(Bloomberg) -- US Secretary of State Antony Blinken will have a candid discussion about the war in Ukraine with his Chinese counterpart Wang Yi during a summit in Indonesia that’s set to be dominated by the fallout from Russia’s invasion, a top official said.

“We’ve had a number of communications at senior levels with our Chinese counterparts about what we expect, not just from the People’s Republic of China but from really all responsible members of the international community regarding Russia’s brutal invasion of Ukraine,” Assistant Secretary of State for East Asian and Pacific Affairs Daniel Kritenbrink told reporters in Washington on Tuesday.

“This will be another opportunity, I think, to have a candid exchange on that, and to convey our expectations about what we would expect China to do, and not to do, in the context of Ukraine,” he added.

Blinken leaves for Bali on Wednesday to attend the G20 foreign ministers meeting before continuing on to Thailand. He will meet Wang on Saturday, the first face-to-face encounter between the two since October, amid heightened geopolitical tensions between the US and China, which announced a “no limits” friendship with Russia just before the invasion of Ukraine in late February.

Blinken’s priority in his meeting with Wang will be to emphasize the US commitment to “intense diplomacy” with Beijing and to “manage responsibly the intense competition” between the two countries, Kritenbrink said, adding that the US wants to do everything possible to “prevent any miscalculation that could lead inadvertently to conflict and confrontation.”

Biden to Get Little Inflation Relief If He Eases China Tariffs

Blinken will lead efforts at the G20 meeting -- whose members represent about 80% of global GDP -- to focus on the role Russia’s invasion and effective blockade of Ukrainian grain exports have played in sparking an international food crisis, according to Assistant Secretary of State for Economic and Business Affairs Ramin Toloui.

Blinken will also press to have the ministers discuss the political situation in Myanmar, where the US has accused the military rulers of genocide against the Rohingya minority, the officials said.

The top US diplomat isn’t expected to meet with Russian Foreign Minister Sergei Lavrov, who is also scheduled to attend the gathering, State Department spokesman Ned Price said earlier on Tuesday. US officials have maintained that talks would be pointless unless Russia shows that it is meaningfully interested in a diplomatic solution to the Ukraine conflict.