Boeing Co.’s board is back on the hot seat ahead of the planemaker’s annual meeting Tuesday, as investors ponder a new rebuke for company leadership.

The jabs herald more turmoil for Boeing’s leadership, even if a mass shareholder revolt is unlikely. While the stock has rebounded from last year’s plunge caused by the coronavirus pandemic, the outlook for further gains is muddled. Investors want insight from Chief Executive Officer Dave Calhoun into how Boeing plans to shed its US$64 billion debt load, return to profitability and prevent Airbus SE from converting its market lead into longer-term dominance.

“Does the movement in the stock accurately reflect the prospects for the company?” said Robert Spingarn, an analyst at Credit Suisse Group AG, who has a neutral recommendation on Boeing. “The answer depends on your time frame. In the short term, my view is no. Boeing has a lot of wood to chop.” 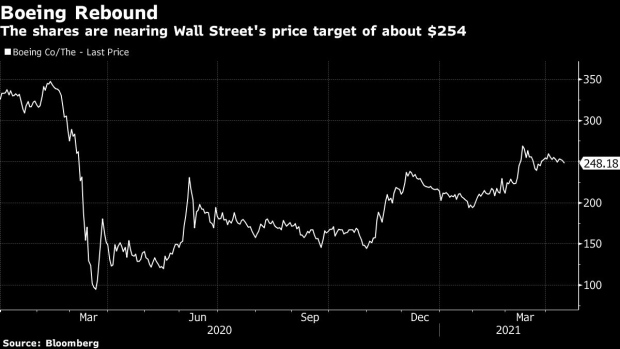 The most pressing short-term challenge for the Chicago-based planemaker, beyond repairing its balance sheet, is to end a recent string of manufacturing faults that have further hammered its reputation for building quality products. Boeing’s emergence from one of the deepest crises in its 104-year history -- the coronavirus pandemic and grounding of the 737 Max after two deadly crashes -- has been marred by other lapses.

The company finally resumed 787 handovers after halting deliveries for five months to find and repair tiny structural flaws. As of the end of March, Boeing still had about 96 of the wide-body aircraft parked around its factories and in a California desert, equating to about US$12 billion of inventory, by Spingarn’s estimate.

More recently, Boeing has uncovered minor electrical grounding issues that potentially affect about 450 Max jets, including 93 recently delivered aircraft. While the disruption made news around the globe, the shares didn’t swoon like they might have a year ago, when Boeing was a laggard on the Dow Jones Industrial Average.

Investors who’ve embraced Boeing as a “reopening” trade seem willing to look forward to its mid-decade recovery, past the billions of dollars it will burn through this year -- and any controversy swirling around its boardroom. “The stock seems to be primed to respond well to positive news,” said Seth Seifman, an analyst with JPMorgan Chase & Co. who has a neutral rating on the shares.

Boeing has surged 85 per cent over the last 12 months, the fifth-biggest gain on the Dow, as the shares of aerospace companies and other manufacturers have joined a broad rally spurred by the expanding vaccination campaign. The shares dipped 2.2 per cent to US$242.70 at 12:51 p.m. in New York.

Whether the euphoria will fade is an open question. Investors are starting to take a more discerning look at the fundamental business of industrial companies, said Robert Stallard, analyst with Vertical Research Partners. Boeing’s leadership is part of the “tapestry” under consideration.

Longer term, Boeing faces the challenge of demonstrating its focus on engineering excellence after years of cost-cutting. Its recent initiatives to bolster safety “should have been implemented many years ago,” said Ron Epstein, analyst with Bank of America Corp. Boeing is “just beginning to dig its way out of this hole.”

Another shareholder advisory firm, Calvert Research and Management, is also calling for a board shakeup. But Institutional Shareholder Services is backing the full slate of directors, citing Boeing’s turnaround efforts. That’s a shift from last year, when ISS opposed four board members.

Kellner has been stepping up his outreach to investors in recent weeks to discuss complaints, shore up support and point out the progress made in revamping the Chicago-based planemaker and its board, said a person close to the board.

“The Boeing board of directors, management team and employees are absolutely committed to strengthening our operations, culture, systems and performance,” Kellner, who took the chairman’s job in late 2019 in an earlier reshuffling, wrote in a letter to shareholders in the company’s proxy statement. He declined a request for an interview.

The former Continental Airlines CEO has emerged as a hands-on leader beyond his dealings with investors. Kellner is poised to play a key role in eventually finding a successor to Calhoun, who turned 64 this month, said the person, who asked not to be identified discussing confidential matters.

And Kellner doesn’t see an immediate need to replace the two directors stepping down with tomorrow’s session -- retired Medtronic Inc. CEO Arthur Collins and former U.S. Trade Representative Susan Schwab. But Kellner is open to adding directors with specific skills, like engineering or manufacturing expertise, when they become available, the person said.

Among the chairman’s changes so far: recruiting four new directors over the past year, two of them engineers and the third a former senior executive at one of Boeing’s largest suppliers. Directors also adopted a shareholder recommendation to permanently establish an independent chairman who’s elected after every annual meeting.

That was the crux of controversy at last year’s meeting. All three advisory firms are bucking management and supporting two proposals: one calls for greater transparency for Boeing’s lobbying and another would enable shareholders to take action on key issues that arise between annual meetings.

In a letter to shareholders today, Boeing said that later this year it intends to make its website disclosures on direct lobbying “easier to locate and digest.” The company also pledged to provide more detail on how the board oversees its political advocacy and ensures its lobbying is “consistent with our values and our long-term business strategy.”

That’s in addition to a 22-page presentation sent to shareholders earlier this month, which provided a detailed timeline of the steps Boeing has taken to rebuild its business since the pandemic upended aviation a year ago. The deck of charts also highlighted Kellner’s efforts to overhaul the board, inject fresh leadership and instill a greater focus on safety.

“I guess that’s an indication they’re worried about the vote,” said John Chevedden, the shareholder activist who proposed separating the chairman and CEO roles last year, and the right to act by written consent for Tuesday’s session. “It doesn’t send a good message that they’ve learned a lesson by having these holdovers in positions on the board.”

There’s no turning back the clock to 2018, when Boeing rang up US$101 billion in sales. However shareholders vote, Kellner and the board face a future marked by sharply reduced production rates and profits from its two most important commercial franchises, the Max and the Dreamliner.

“How can they possibly generate the same amount of cash that they generated before? They can’t,” said Epstein, who has a neutral rating for Boeing. “It’s impossible.”