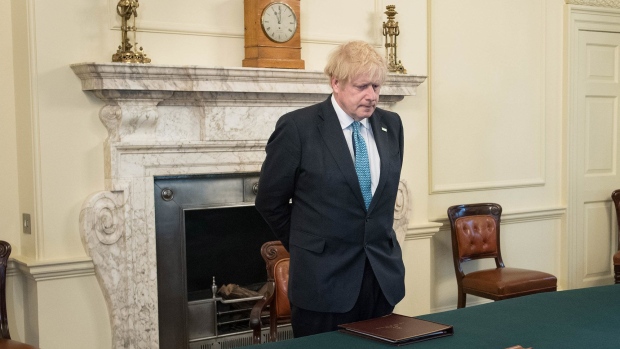 Prime minister Boris Johnson, stands inside the Cabinet Room of 10 Downing Street, London, to observe a minute's silence in tribute to the NHS staff and key workers who have died during the coronavirus outbreak on April 28, 2020 in London, England. Stefan Rousseau/WPA Pool/Getty Images , Photographer: WPA Pool/Getty Images Europe

U.K. Prime Minister Boris Johnson said his condition deteriorated so rapidly from the coronavirus that his doctors were preparing how to explain his death, according to an interview with the Sun on Sunday.

“The bad moment came when it was 50-50 whether they were going to have to put a tube down my windpipe,” Johnson said. “It was a tough old moment, I won’t deny it. They had a strategy to deal with a ‘death of Stalin’-type scenario.”

Johnson spent three days in the critical unit at St Thomas’s Hospital in London and was given oxygen treatment to help him breathe. He said later it could have gone either way and thanked the medicals pros for saving his life.

“It was thanks to some wonderful, wonderful nursing that I made it,” he said to the Sun. “They really did it and they made a huge difference.”

In a series of tweets on Sunday, Johnson reiterated the five tests that must be met before lifting Britain’s lockdown. The government has come under increasing pressure to set out how it will relax the restrictions as the economy craters. The conditions are: