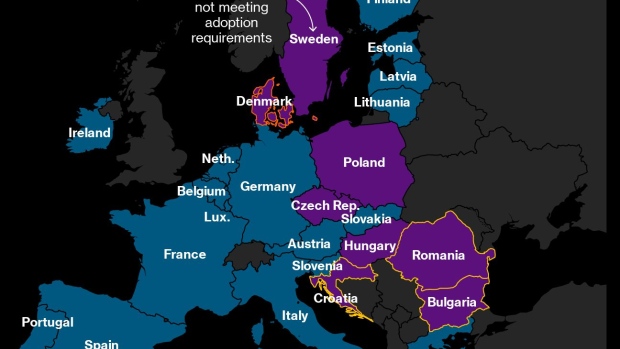 “As a coalition government, we’ve made a commitment to enter the euro zone on Jan. 1, 2024,” Vassilev said in an interview with Bloomberg News in the capital Sofia on Friday. The benefits of transitioning from Bulgaria’s lev to the euro outweigh the drawbacks, he said.

The Bulgarian government under Prime Minister Kiril Petkov is set on navigating fragile backing for the single currency as it adheres to the 2024 target. Vassilev echoed a commitment made earlier this month by Petkov, who redoubled Bulgaria’s vow to meet the target date, promising a public messaging campaign to communicate the benefits of the euro.

Vassilev, 44, and Petkov, 41, both alumni of Harvard Business School, were elected in an upset victory last year with a new party, Continuing the Change, that vowed to tackle endemic corruption in the EU’s poorest member state.

Policy makers in Sofia, encumbered by a national per-capita economic output of just more than half the EU average, aim to adopt the euro to help the economy narrow the gap with richer peers in the bloc. But about half the population takes a dim view of the single currency, according to a July Eurobarometer survey.

Joining the euro will help reduce interest rates, boost investor confidence and help Bulgarian businesses by cutting transaction costs, Vassilev said. The euro crisis that began in Greece over a decade ago -- and that nearly pulled the currency union apart -- shows that the currency’s flaws can be addressed, he said.

“There are definitely some, shall we say, design challenges -- but in the Greek crisis we saw that these can be overcome,” Vassilev said.

Petkov’s fragmented four-party coalition is confronting a familiar challenge to reformers in Bulgaria, which is emerging from a tangled political crisis marked by graft scandals, widespread distrust of public institutions and widening inequality.

Separately, Vassilev said the government is exploring options for a crypto payment mechanism “in the short to medium term,” saying it’s in talks with the central bank as well as “crypto industry players.” He ruled out the country as a hub for digital-currency mining.