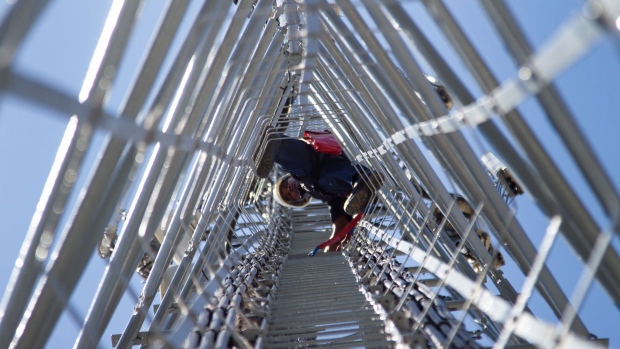 An employee of CJA Telecoms climbs up the inside of an MTN Group Ltd. cellular phone mast to perform contract maintenance work in Cape Town, South Africa, on Wednesday, March 22, 2017. MTN is gauging investor interest for its first sale of rand-denominated bonds in seven years as Africa's largest mobile-phone operator struggles to repatriate earnings from its Nigerian business. , Bloomberg

TORONTO -- Despite the sudden, recent shift in how millions of Canadians are doing their work because of the COVID-19 crisis, it seems most parts of the communications system were up to the challenge in the first week of widespread social distancing.

There have been many cellphone calls that don't get through on the first try and some high-traffic toll-free numbers have been busy at peak times, but none of the major cable, phone or internet networks has reported a widespread outage.

Ed Antecol, a 30-year veteran of the telecom industry who works in the Toronto area for Comsolve Inc., said Friday he was amazed at how stable the system has been given how many people have been working remotely.

"I was pretty impressed," Antecol said in a phone interview.

That's not to say there weren't problems but Antecol -- whose career as a telecommunications professional has included setting up 1-800 numbers -- said most seemed to be at specific bottlenecks.

For customer service call centres and conference call services that provide toll-free numbers, such bottlenecks typically arise either because there aren't enough agents to answer calls, or not enough physical phone lines to handle the load, he said.

"It's (more) rare to see a bottleneck in the telephone companies' networks themselves, although that is technically possible," Antecol said.

Individual cellphone towers can be another pinch point, since people working from home are often using mobile phones rather than landlines, and more organizations are holding long conference calls that tie up wireless channels.

Antecol himself had to try four or five times before one mobile call would go through on Thursday.

"I would dial and suddenly my cell phone would show that it's hung up," he said.

On the other hand, once he got through, Antecol was on conference calls for hours at a time as he and more than 50 coworkers continued to operate the business from their homes.

"Given the amount of conference calls we had all day, and that (was) probably replicated across the entire city, I was actually amazed that things were as stable as they were," Antecol said.