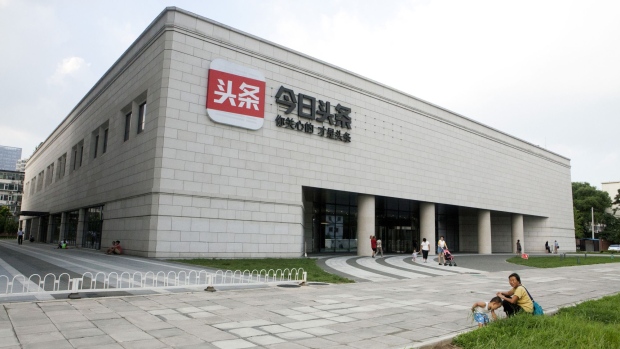 The Beijing ByteDance Technology Co. headquarters stands in Beijing, China, on Thursday, Aug. 17, 2017. The company is best known for a mobile app called Jinri Toutiao, or Today's Headlines, which aggregates news and videos from hundreds of media outlets. In five years, the app has become one of the most popular news services anywhere, with 120 million daily users. Photographer: Giulia Marchi/Bloomberg , Bloomberg

ByteDance Ltd. has kicked off preparations for an initial public offering of some of its main businesses, including China’s most popular video app Douyin, according to people familiar with the matter.

ByteDance could raise at least several billion dollars from a listing of the Chinese assets, although the size could still change as deliberations are at an early stage, the people said, asking not to be identified as the information is private.

A representative for ByteDance didn’t immediately respond to requests for comment.

ByteDance, founded by Zhang Yiming in 2012, has demonstrated the rare ability to create repeated hit services in competition with giants like Tencent Holdings Ltd. and Alibaba Group Holding Ltd. His first big success was Toutiao, which means “headlines” in Chinese. TikTok became a global phenomenon, while its twin video app Douyin is leading in China’s domestic market.

Trading of ByteDance shares in private markets valued the company at more than US$250 billion, people familiar with the matter have said, cementing its crown as the world’s most valuable startup.

ByteDance has been looking to list some of its biggest assets when it was in talks with a group for investors over fundraising, Bloomberg News reported in November. The startup plans to file a prospectus for a Hong Kong IPO in the second quarter, Caixin reported Wednesday, citing unidentified sources.

--With assistance from Julia Fioretti and Dong Cao.