Canadian housing starts unexpectedly surged in April, in another sign of recovery for the nation’s battered real estate market.

Builders started work on an annualized 235,460 units last month, the highest level in 10 months and up 23 per cent from 191,981 units in March, the Canada Mortgage and Housing Corp. reported Wednesday. The gain was driven by new multi-unit construction in Toronto and Vancouver.

The report is in line with other recent data that suggests the nation’s housing sector is stabilizing from a recent slump, easing concerns that some of the country’s more expensive markets like Toronto and Vancouver were poised for a major correction.

Earlier this week, Bank of Canada Governor Stephen Poloz said he’s confident housing will return to growth later this year, once some of the “froth” in those two markets dissipates.

“The Bank of Canada will take this as a factor supporting its forecast for a rebound in housing activity,” Royce Mendes, an economist at CIBC Capital Markets, said in a note to investors.

The level of new building in April is well above recent averages, with economists anticipating housing starts at 195,500 during the month. 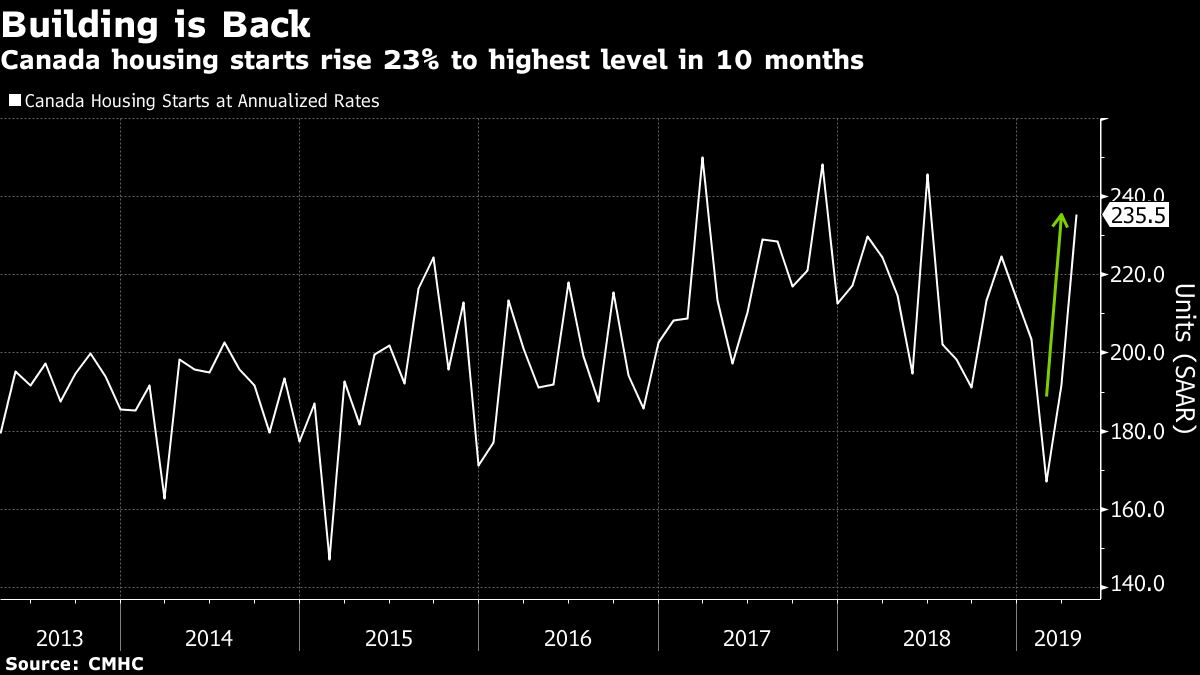 Poloz cited data in a speech on Monday that showed the Bank of Canada’s five interest rate increases since 2017 are having little impact on borrowing costs for mortgage renewals this year, largely because of a recent drop in global bond yields.

Multiple-unit urban starts were up 30 per cent to an annualized 175,732 units, while single-detached starts in urban centers were up 6 per cent, CMHC said in its release. Vancouver recorded a 63 per cent increase last month, while new home starts in Toronto were up 18 per cent.

Builders also had been holding back construction earlier this year because of excessively cold weather. New home starts slumped to 166,290 units in February -- the lowest monthly level in three years -- as chilly weather slowed construction.