Mortgage growth has shrunk to a 17-year low in Canada, increasing pressure on the country’s big banks to find business elsewhere.

Residential mortgage growth rose 3.1 per cent to $1.55 trillion in December from a year earlier, the slowest pace since May 2001, and half the growth rate from two years ago, according to data from the Bank of Canada.

“The bread-and-butter of profitability for Canadian banks — is going to have a little less butter on the bread," said Craig Fehr, investment strategist at Edward Jones & Co., whose firm oversees $30.8 billion in Canada. “That is, in many cases, the largest and most profitable and steady of the businesses that these banks operate."

Investors will need to “recalibrate” their expectations in what is arguably one of the most important trends in the industry in years, Fehr said in a phone interview. “The banks that will do best are the ones that do have other levers to pull.”’

Government efforts to rein in household debt, including tougher mortgage-qualifying standards, have dramatically cooled the housing market in the past year. Toronto and Vancouver posted their worst year for sales in at least a decade last year. Vancouver’s market waned further in January as average prices tumbled 9.1 per cent over the past 12 months. 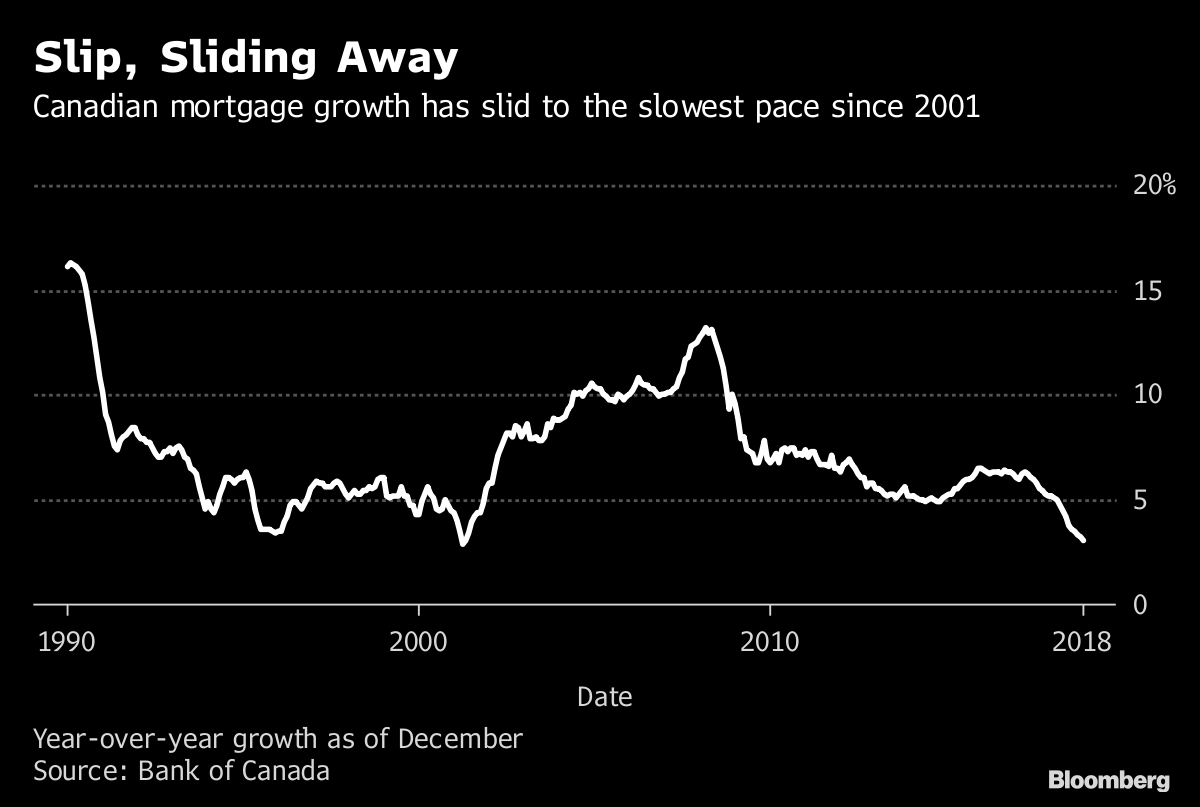 “This is not something that’s just spontaneously happening: This is an engineered slowdown with the banks being willing participants in some of these changes that have been made,” CIBC Capital Markets analyst Robert Sedran said in an interview. “It makes for a healthier lending environment and a healthier housing environment for the longer term.”

An overinflated housing market and high debt are among the reasons cited by some U.S. hedge funds and short-sellers over the years who have bet against the Canadian banks. On average, about 2.4 per cent of shares of the six biggest Canadian banks is held in short-interest positions as of the end of January, according to data from financial analytics firm S3 Partners.

Vindication for those shorts appears some way off for now. The eight-member S&P/TSX Commercial Banks index has tread water for about two years. It gained about 3.3 per cent compared with a 0.8-per-cent increase in the S&P/TSX Composite Index and a 4.4-per-cent gain in the U.S. KBW Bank Index.

Canadian bank executives have already been conveying their expectations for slower growth this year.

“In today’s context it’s sending a strong statement that the investments that we’ve made are going to pay off in relatively good growth,” she said in a Jan. 22 interview.

Executives at rival banks are expecting domestic mortgage growth to be in the low to mid-single digits in 2019, when the country’s economic expansion is expected to slow to 1.9 per cent.

Investor David Baskin, whose Baskin Wealth Management oversees $1.2 billion, said he’d rather banks focus on wealth management. “I’m not looking for the banks to grow their mortgage business," he said. “I don’t think that’s where the juice is."

Steve Belisle, a Montreal-based portfolio manager with Manulife Asset Management who helps oversee about $7.5 billion, said the banks are countering the slowdown in residential lending with growth in business loans — something that makes Belisle a bit uneasy. Canada’s six biggest banks had an 11-per-cent jump in commercial lending last year.

“The overall loan growth for the banks is actually steady — it has been around 4.5 per cent — and that’s because they are offsetting the slowdown in mortgages with commercial lending, which is low double digits," Belisle said. “That’s adding risk at the peak of the economic cycle."