Canadian heavy crude has slipped back into a bear market, with the price of Western Canada Select down more than 20 per cent from its April 9 peak.

The oil sands settled down nearly 10 per cent at $41.35 per barrel on Thursday. WCS fell along with other types of crude including the North American benchmark West Texas Intermediate, which traded below US$60 per barrel Thursday for the first time since the end of March amid worries over the U.S. and China’s trade dispute and a surprise jump in crude inventories. 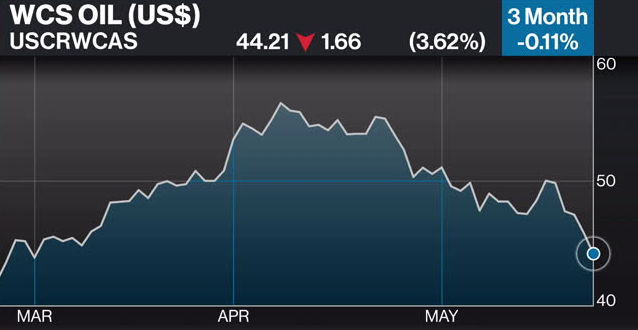 Some energy executives at companies including Canadian Natural Resources Ltd. and Cenovus Energy Inc. have applauded the curtailment program for stabilizing the price of WCS, while others have said they benefited from the steep discount.