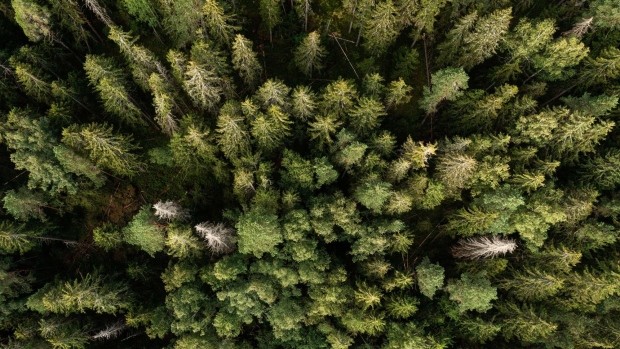 A section of forest in part of the Natura 2000 nature protection areas in Kirkkonummi, Finland, on Friday, July 16, 2021. The European Union is fleshing out the part of its climate plan to absorb more greenhouse gases from the atmosphere and promote biodiversity through the use of forests. Photographer: Roni Rekomaa/Bloomberg , Bloomberg

In an analysis of 337 million carbon credits intended to prevent deforestation, Sylvera said 143 million, or more than 40%, are “high quality,” achieving its top three grades in an assessment covering factors such as a credit’s contribution to avoiding or removing CO2, as well as the permanence of such actions.

The findings are “contrary to popular belief that all nature-based projects of this kind are unreliable or fraudulent,” the company said in a statement on Wednesday.

Carbon credits allow companies to continue polluting while funding emissions reductions elsewhere in the world. The controversial instruments are lauded by some as a key solution for fighting climate change, while critics, including scholars and activists, say the credits provide a vehicle for greenwashing, distract from meaningful climate action and exploit vulnerable communities on the frontlines of climate change.

Voluntary carbon credits, also known as offsets, represent a metric ton of reduced, removed or avoided greenhouse gas emissions, and are bought by companies and individuals to subtract emissions from their own accounts to declare improved environmental performance. The poor quality of many offsets offered on the market has invited skepticism. Credit Suisse Group AG has referred to the opaque, unregulated industry as a “ wild west.”

Allister Furey, co-founder and chief executive officer at Sylvera, said in an interview that carbon credits are the “least worst solution” on the table. Offsets can help provide finance for stopping deforestation and removing carbon from the atmosphere, both of which will be needed if the world is to avoid catastrophic levels of warming, he said.A sizeable supply of quality credits gives options to companies that are serious about cutting their emissions, and it also removes an excuse for companies that use a lack of credible credits as a pretext for inaction, said Furey. Quality credits are a “penalty, not a get out of jail card,” he said.  “Everyone is shortchanging the atmosphere, the climate system, and what’s the penalty? There is no penalty,” Furey said. “Offset quality is now not an excuse: You have an economic disincentive to underdeliver.”

Sylvera’s “The State of Carbon Credits 2022” report focuses on deforestation credits issued from “ Reducing Emissions from Deforestation and Forest Degradation” projects, or REDD+.  Nature-based solutions represent one of the largest categories of carbon credits available in the voluntary market at about 45% of all credits, and REDD+ credits make up the lion’s share of those offsets, Sylvera said.The report found 31% of REDD+ offsets projects are “high quality and low risk investments.” This means they have been awarded a ranking of AAA to A in Sylvera’s grading system. The analysis covers carbon performance, additionality, permanence and co-benefits for local benefits.

Sylvera, a climate tech firm based in London, uses machine learning and satellite imagery to assess the quality of carbon projects. Some 29% of credits fall in the middle of its ratings scale, between BBB and B, while 25% fall in the lowest tier, earning between C and D “due to having red flags in one or more fundamental areas,” it said.

Companies buying offsets to deliver on emissions reduction goals should “stop buying” the bottom tier, “get fussy” over the middle-ranked credits and “get deliberate” about buying the high quality credits, Furey said.