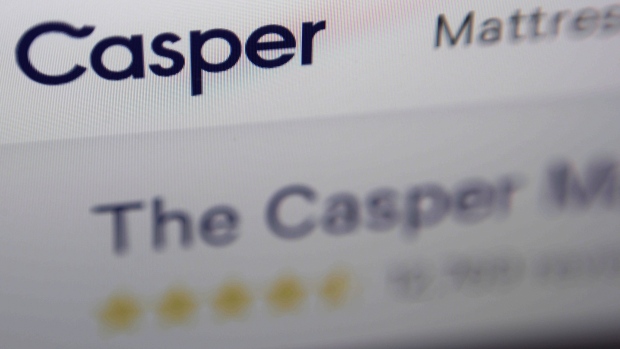 Does this script sound familiar?

In this case, it’s the path of online mattress retailer Casper Sleep Inc., which filed last week for an initial public offering. The New York-based company, founded in 2014, became the leading brand in the so-called “bed-in-a-box” industry, thanks to its pioneering status in the industry and savvy marketing.

It got loads of press due to early backers like actor Ashton Kutcher. The company kept growing and, according to PitchBook, raised a total of $355 million, including from retail giant Target Corp. Its valuation topped $1 billion, making it a so-called unicorn, cementing its status as a darling of the venture-capital world. Casper joins a new generation of direct-to-consumer brands, like eyeglass-maker Warby Parker, that are trying to disrupt everything from toothbrushes to socks.

But following Casper’s IPO filing, investors now know exactly how much it has cost the company to reach its current annual sales that approach $400 million. Casper has racked up $300 million in net losses, driven in large part by a massive marketing budget to win over consumers in a very crowded market. From 2016 to September 2019, for example, it spent $423 million on advertising.

The company is “deeply unprofitable because the way it has acquired customers has been through expensive marketing,” said Neil Saunders, managing director of GlobalData Retail. “It’s made huge losses, and there’s no real sign it can turn things around in the near future.”

Casper’s financial picture may also sully investors’ view of other direct-to-consumer brands that cut out the middleman to pass on savings to consumers. Many of these firms were built by advertising on Facebook and Google. That lowered barriers to entry and companies poured in, making attaining new customers more expensive. To keep growing, brands turned to opening stores and adding ancillary products -- steps that Casper, which has 60 locations, has already taken.

“The risk it that it sours the financing market for more of these online-first brands,” said Jason Stoffer, a partner at venture-capital firm Maveron, which has stakes in digital brands like Everlane. “That’s not fair to many of them.”

While Casper has expanded its sales by convincing consumers they need to invest in a good mattress, its cost of sales has also grown rapidly. It lacks the steady stream of revenue that subscription services like Netflix Inc. and Peloton Interactive Inc. enjoy. And it doesn’t have high-frequency purchases, like clothing, so if consumer demand for mattresses and sleep accessories dries up, the company could feel the effects quickly.

Costs may keep growing as well. In just the U.S., there are more than 175 online mattress brands, according to Jefferies Financial Group Inc. Competitors with deeper pockets, like Wayfair Inc., are also plowing more into the market.

“We have a history of losses and expect to have operating losses and negative cash flow as we continue to expand our business,” Casper said last week in its financial filings. The mattress maker’s sales increased a cumulative 20% in the first three quarters of last year, down from growth of more than 40% in each of the previous two years.

Now, Casper will have to convince Wall Street that it can keep growing while showing a path to profitability. That’s made all the more difficult by the poor share performance of Blue Apron Holdings Inc. since its 2017 IPO or the recently shelved offering of highly-unprofitable We Co.

“For this company to become sustainable and profitable, they either need to become much more efficient on the marketing side, or they need to figure out how to generate more lifetime value out of their customer base,” Stoffer said. “Probably both.”

To counter concerns, Casper described itself as part of the $432 billion global sleep economy; a market that encompasses “light, sound, temperature, humidity, mattress, bedding, bedtime and wake-up rituals.” It’s expected to grow about 6% a year as more people view sleep as crucial to good health, the company said. The company also made a small round of layoffs last month.

Casper didn’t respond to requests for comment from Bloomberg News.

“We believe that sleep consists of more than just the act of sleeping, and instead, includes the entire set of human behaviors that span from bedtime to wake-up and affect sleep quality,” Casper said in the filing. “This is what we refer to as the ‘Sleep Arc.’”

The company boosted spending in developing sleep products by almost 90 per cent to US$12.3 million in 2018. It now has novelties such as the experiential “napmobiles” -- mobile pods that let people test its mattresses. The company has developed and now sells a product called Glow Light, a US$129 lamp that brightens and fades “with the body’s circadian rhythm.”

Casper has also expanded into pillows, sheets, duvets and bedroom furniture. Its mattresses range in price from US$356 to US$2,516. The company seeks to expand from 60 to about 200 stores in North America.

As Casper seeks to expand, the mattress industry as a whole has convinced consumers they need new mattresses more frequently in the interest of health and well-being, according to Rod Sides, U.S. retail leader for Deloitte. Casper in particular has been good at this, he said.

“At least when I was a kid, I don’t remember you would buy mattress as often,” Sides said. “I think the industry has done a phenomenal job of creating demand in a way that few others have.”

Still, the industry has proven to be an unforgiving one. Mattress Firm, for example, filed for bankruptcy in 2018, later emerging from it, after an overly zealous expansion. S&P Global Ratings cut the credit rating of mattress and bed products maker Serta Simmons Bedding LLC’s by one notch to CCC in December, citing intensified competition.

There’s also the question of how profitable it is to deliver bulky items like mattresses -- and potentially take them back if the client isn’t satisfied. Casper has one of the most lenient return policies in the industry at 100 days.

“Even a modest return rate really does undermine the economics because you can’t reuse that product,” GlobalData’s Saunders said. “You have to essentially throw it away. It’s just waste. That undermines the economics of that business model.”

--With assistance from Jordyn Holman, Sarah McBride and Leslie Patton.