90% of our assets are on the sidelines in cash: Portfolio manager

An ETF issuer is following in Cathie Wood’s footsteps with a new innovation-themed fund, despite the fact that her flagship ETF tumbled 61 per cent this year.

The AOT Growth and Innovation ETF (ticker AOTG) is set to be listed at the end of next week. Similar to the Ark Innovation ETF (ARKK), it will be actively managed and invest in companies with high growth potential and low marginal costs, according to a filing with the Securities and Exchange Commission.

“When I saw news of the launch, the first reaction was: well this is a bit of head-scratcher,” said Cinthia Murphy, director of research at ETF Think Thank. “There’s nothing more out of favor than super growth stocks.”

Those stocks have been under immense pressure as the Federal Reserve raises interest rates in response to inflation that’s proved more persistent than anticipated. After the central bank delivered a 75 basis-point hike Wednesday, tech stocks slumped Thursday, with the Nasdaq 100 Index falling 3.6 per cent.

Along with ARKK, other innovation-themed funds have also taken a beating this year. The iShares Exponential Technologies ETF (XT) and the SPDR S&P Kensho New Economies Composite ETF (KOMP) have both fallen more than 30 per cent.

John Tinsman, founder of AOT Invest LLC, and a money manager for the new fund, sees it as a good time to launch. 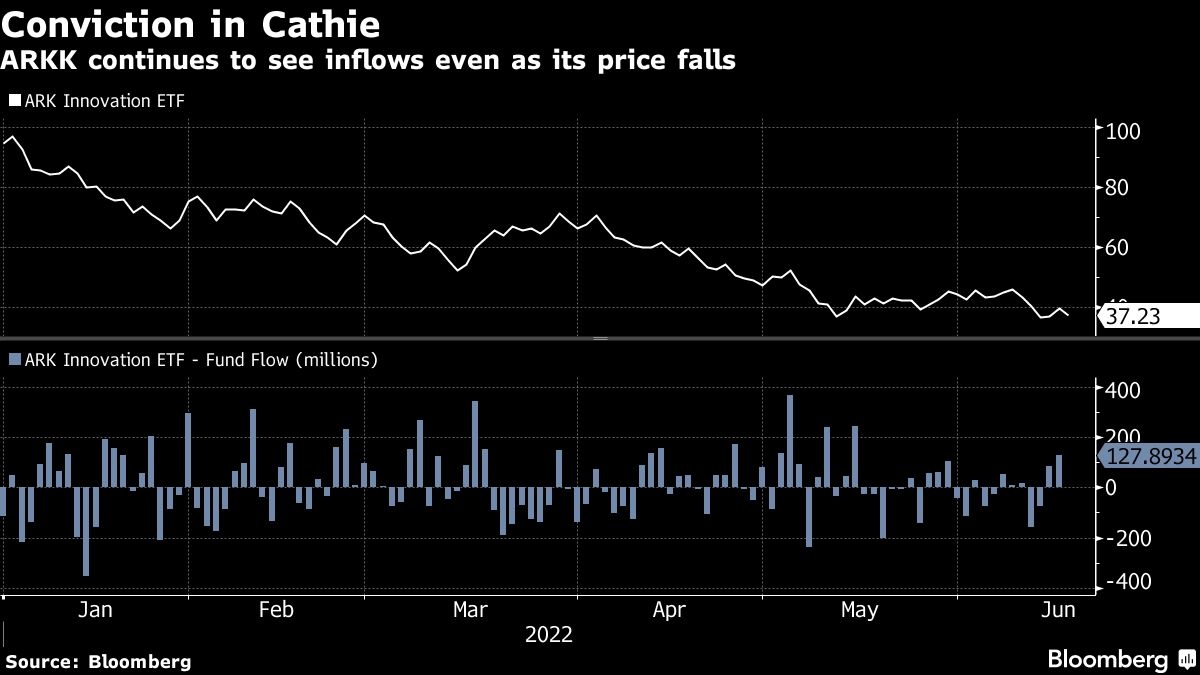 “We’ve seen valuations come down in growth significantly,” he said. Also, many of the fund’s likely holdings are profitable and have little debt, meaning they don’t need to borrow more as interest rates rise.

He’s not the only who sees opportunity in growth. A team of JPMorgan strategists led by Marko Kolanovic said that within equities, it favors “segments that sold off strongly and are trading near record low relative valuations,” such as innovation. “The most attractive investment opportunities are in these oversold sectors that provide asymmetric upside,” the strategists wrote in a note this week.

Compared with ARKK, the new ETF will be more disciplined in looking at the price and profitability of holdings, Tinsman said.

“We’re taking a bit more of a traditional stance on the valuations of the companies, but also providing a lot of the same sauce that’s in the Cathie Wood funds.”

Tinsman said the new fund originated with his family’s fertilizer business in Iowa. The family wanted to diversify and it looked at investing in ARKK, but wanted a portfolio with more reasonable valuations, so Tinsman created the new ETF.

The fund’s likely biggest holdings will include some more established tech companies that ARKK doesn’t invest in, such as Microsoft Corp. and Alphabet Inc., according to Tinsman. The new ETF will have the same expense ratio as ARKK at 75 basis points.

A key challenge in competing with Wood is the loyal following she has, said Murphy of ETF Think Thank. Even though ARKK has tumbled this year, investors have poured US$1.5 billion into the fund.

“ARKK is a success because of Cathie Wood; everyone knows her name,” she said. For the new ETF, “putting a face to the fund I think would be really important if they really want to find that strong following and compete with someone like Cathie.”