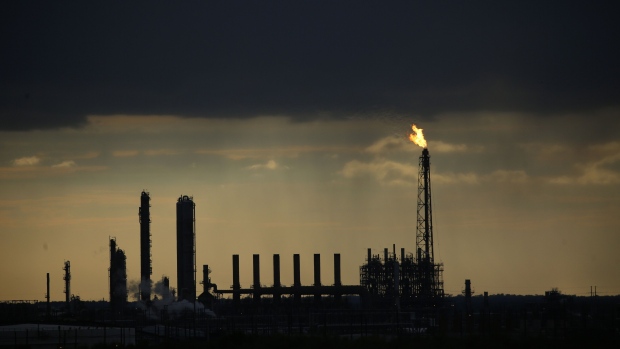 A gas flare at a Chevron Phillips Chemical Co. plant ahead of Hurricane Laura in Port Arthur, Texas, U.S., on Tuesday, Aug. 25, 2020. Hurricane Laura is poised to become a roof-ripping Category 3 storm when it comes ashore along the Texas-Louisiana coast, threatening to inflict as much as $12 billion of damage on the region and potentially shutting 12% of U.S. refining capacity for months. Photographer: Luke Sharrett/Bloomberg , Bloomberg

(Bloomberg) -- Chevron Corp. shareholders voted for a proposal to reduce emissions from the company’s customers, the latest sign that oil titans are coming under increasing pressure to address environmental concerns.

According to a preliminary tally, 61% of investors backed the proposal at the company’s annual investor meeting on Wednesday, rebuffing the company’s board, which had urged shareholders to reject it. An item asking Chevron to report on how a significant reduction in fossil-fuel demand would affect its business didn’t pass, and a request for a report on political lobbying was also voted down.

The vote, which came on the same day Royal Dutch Shell Plc was ordered by a Dutch court to slash its emissions harder and faster than planned, highlights an unprecedented push to hold oil giants accountable for their contributions to climate change. Also on Wednesday, Exxon Mobil Corp. faced a showdown at its annual meeting with an activist investor pushing the explorer to embrace a transition away from fossil fuels.

ConocoPhillips investors earlier this month rebuffed the company’s board to support a similar push for a full-scope emissions reduction target. Amsterdam-based shareholder activist group Follow This said that 58% of investors backed the proposal.