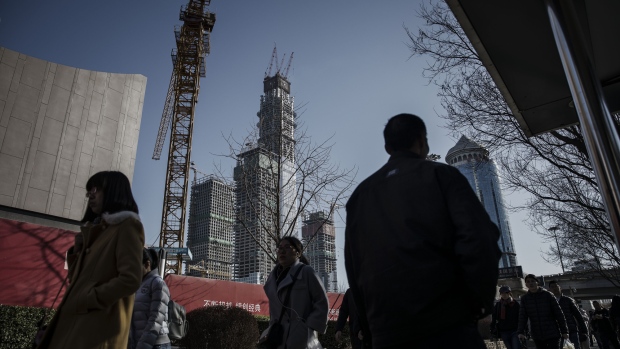 Pedestrians walk past a construction crane in downtown Beijing. , Bloomberg

China’s high-profile campaign to funnel more credit to private companies has stalled according to a number of private surveys and reports, adding to concerns over the nation’s decelerating growth.

The credit confidence of small and medium enterprises began to tumble in April and is now below its level in October, when President Xi Jinping proclaimed his “unwavering support” for private companies, according to a Standard Chartered Bank Plc survey. Without further government action, private firms may be “heading for another liquidity crisis,” says research firm Gavekal Dragonomics in Beijing.

Xi championed the effort to funnel credit to more efficient private companies in an attempt to bolster an economy struggling amid the trade war with the U.S. and a campaign to curb financial risks, especially in the $9 trillion shadow banking system. Its lack of traction is a set back for policy makers striving to rev up new growth engines, with borrowing costs stubbornly high even after the government set a goal of lowering them by 1 percentage point this year.

“Regulators must either ease up on the shadow credit crackdown, or create more effective incentives for banks to seek out and lend to private firms,” Thomas Gatley, an analyst at research firm Gavekal Dragonomics wrote in an August 21 note. “At present, neither of these options seems to be on the table, and the likelihood of another liquidity crisis for the private sector is on the rise.”

The campaign to channel more lending to private companies started well and the Standard Chartered Small and Medium Enterprise Confidence sub-index for credit reached a 16-month high in March. But since then, attempts to funnel more credit to the private sector have collided with banks’ reluctance to lend to higher-risk private companies amid a decelerating economy that’s headed for its slowest growth in almost 30 years.

China is grappling with a trilemma as it strives to fund state-owned enterprises, get more credit to private companies and also deleverage the economy, says Derek Scissors, chief economist at the China Beige Book International in Washington.

“It’s impossible to do all three and supporting state enterprises is inviolate under Xi,” he says.

Small and medium size companies’ borrowing costs have also risen since the second quarter, according to the Standard Chartered survey. That’s likely because the big five state-owned banks met their lending targets in the first half of the year, leaving smaller banks with higher funding costs to take up the slack, according to Ding Shuang, chief China and North Asia economist at Standard Chartered Bank Ltd. in Hong Kong.

A corporate financing sub-gauge of business sentiment survey compiled by the Cheung Kong Graduate School of Business has also tumbled since a high in April.

A contrary indicator comes from the central bank, which says loans for “inclusive financing to small and micro-sized enterprises” surged 22.5 per cent in the first half from a year earlier. Gavekal’s Gatley says the measure is a “poor guide,” noting that last year the central bank discontinued a broader measure of “small and micro enterprises” lending without explanation.

The introduction of the more market-driven loan prime rate as a new reference rate for pricing loans this week is intended to improve interest-rate transmission. Former central bank official Sheng Songcheng wrote in the central-bank backed Financial News that it’s likely small and micro-sized quality companies will benefit more than others.

“The positive side is the government still emphasizes directing more loans to small and medium enterprises,” he says. “Usually when they talk about that it will be matched by actions.”