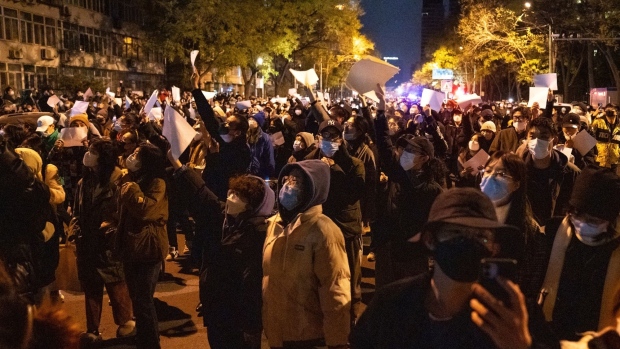 Demonstrators hold blank signs during a protest in Beijing, on Nov. 27. , Bloomberg

(Bloomberg) -- Dissatisfaction runs deep in China and could still spill over into further protests, according to a Chinese Twitter user who has emerged as a key conduit for activists to get their messages past strict internet controls.

The Twitter user — an Italy-based art student who goes by “Teacher Li” — has helped shed light on protests against President Xi Jinping’s Covid Zero strategy by verifying and sharing information sent to him from contributors back home. The videos, photos and first-hand accounts of frustration with government policies continue to flow in, Li said, despite Beijing’s efforts to ease virus curbs in the wake of widespread demonstrations last month.

He said he has received tens of thousands of such reports, giving him unique insight into the country’s fears and anxieties.

“The public lacks a sense of security, with frequent and unpredictable policy changes,” Li told Bloomberg News. The on-the-ground reality has yet to catch up with easing measures, and new moves or policy reversals could bring a “rebound in the unrest,” said Li, who asked to be identified only by his surname to protect his privacy.

Li’s Twitter account, @whyyoutouzhele, which has more than 820,000 followers, has been a critical source both inside and outside China for news about protests that spread in response to a fatal fire on Nov. 24 in the Xinjiang regional capital of Urumqi. While people were initially outraged that Covid controls may have slowed emergency responders, demonstrations soon began to convey broader dissent, with chants for Xi to “step down” during at least one rally in Shanghai.

Overseas aggregators like Li are necessary because China’s censors can quickly flag and remove politically sensitive content from mainstream social media platforms like WeChat or Sina Weibo. To get around that, Chinese internet users have begun sending content to middlemen to share with an international audience, where it can be viewed within China using virtual private network software.

“If it wasn’t me, it would be someone else doing this job,” he said.

It’s risky work for Li, who has seen his Weibo accounts deleted for posting banned content. His parents, who live in China, have been visited repeatedly by local police to pressure him to stop posting, he said.

Li said the country’s vast population of migrant workers should be among the government’s biggest concerns, since they have the least to lose and the most “fighting power.” He cited crowds at a Foxconn Technology Group factory pushing through barricades or people throwing bottles at police in Guangzhou as examples of how protests among migrant workers have become more violent.

“Once people see they can get results with protests, they will bring up more thing they want in the future,” Li said.

--With assistance from Zibang Xiao.