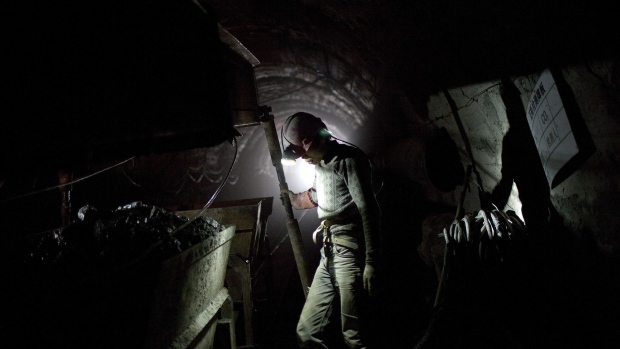 (Bloomberg) -- China is at risk of the same energy-crunch chaos seen in Europe, with a state-run newspaper warning that coal-fired power plants will struggle to keep the lights on this winter.

The nation’s coal-based power producers, which account for more than 70% of the country’s electricity generation, are unable to buy enough fuel after prices surged, state-run China Energy News said in a report dated Sept. 18.

Officials at those plants say they have little coal in inventories, and it’s “almost impossible to buy” the fuel right now, the paper said. Many are struggling with deep operation losses, and some have even turned off their boilers to save costs, the report said.

Energy markets across the world are being rocked by soaring fuel prices, with power companies clambering to secure supplies of everything from coal to gas to fuel oil. Europe has borne the brunt of the crunch, though the U.S. hasn’t been spared either, with electricity prices for the winter soaring to a seven-year high.

In China, the situation has been exacerbated by President Xi Jinping’s ambitious climate goals that discouraged dirty coal mining. A lack of power to supply the world’s second-biggest economy could throw millions of factories and households into chaos, especially when consumption for heating is about to increase during winter.

China’s power producers have such low inventories that some have even warned they only have about a week’s worth of coal left, the Chinese energy newspaper said, without identifying the officials or their plants. The paper, a mouthpiece of the state-run People’s Daily, used to be run by the National Energy Administration, the country’s top power regulator.

Chinese power generators are prioritizing procuring enough coal at the moment and are willing to pay whatever the freight costs, the newspaper said, citing an unnamed official at a plant in the Northeastern region. Traders from the factory were hunting for supplies across the country, only to find out rivals in the Southwestern province of Guizhou, a major coal producing region itself, were competing with them, the newspaper said.

Prices of coal, China’s principal source of energy, have leapt to unprecedented levels after a trade spat with Australia led Beijing to halt imports from the producer. Meanwhile, a spate of fatal accidents in China led to safety inspections earlier this year that curbed domestic output. The most-traded thermal coal futures in Zhengzhou closed at 1,057.8 yuan ($164) per ton on Friday, up 76% in the past year.

In the spot market, thermal coal prices are approaching 1,700-2,000 yuan per ton, with even some of China’s most efficient power plants facing operating losses, the paper said.

Demand for thermal coal in China, which burns half the world’s supply, has been staggeringly high this year, thanks to so-called “catch-up demand” from the economy recovering from the pandemic.

On top of strong demand, a key problem has been supply, with heavy rains subduing production in Indonesia and Australia, the world’s two biggest exporters.

IHS Markit Ltd. expects a tight market with relatively high prices lasting through the end of summer 2022, by which time catch-up demand should have subsided and Chinese power plants will have finally been able to replenish the inventory gap that’s plagued them since late 2020.